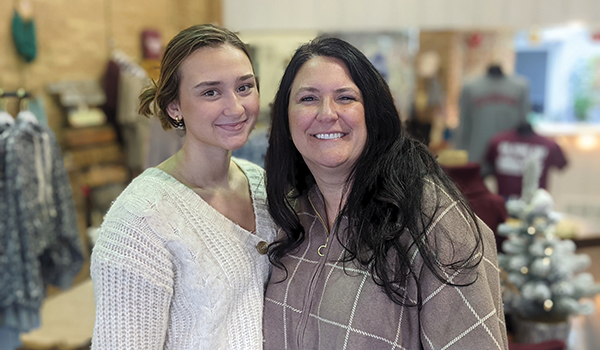 BUCHANAN — A business that has been a fixture in downtown Buchanan for 30 years has rebranded and expanded itself to better serve the community.

The new-look shop offers a variety of new clothing and gift items in addition to the screen printing and embroidery Impressive Lettering has offered the community for years.

“We have wanted to do something like this ever since we opened and bought this place,” said owner Crystal Young. “Impressive Lettering has been here for 30 years. The previous owners bought it and redid it all. She only did the screen printing and embroidery, but we always kind of wanted to take it to the next level. We love clothes, shopping and all of that.”

Young continued the Impressive Lettering business after purchasing the building from its previous owner four years ago. When the COVID-19 pandemic forced the business to shut down, Young and employee Katie Schau used that time to revamp the space by adding a dressing room, removing the carpet in favor of the original hardwood floor underneath and adding displays for clothing and gifts. Schau said the store’s building fixtures and displays were created out of reused materials.

“The pandemic obviously gave us an opportunity,” Young said. “We didn’t really have a choice with some of it, but we decided we would make the most of it and get work done here. There’s nothing else we can do, so that was kind of where it went. We painted and brightened the space up and made it a little more modern, but I feel like it’s still homey and comfortable here. It’s warm and inviting.”

While the remodeling process took longer than expected, Young and Schau were pleased with the results.

“That was kind of a surprise,” Young said. “We had to be shut down much longer than we thought we would have to. It was a huge family effort, which was awesome. We were all very excited when it all came together.”

“It felt right,” Schau added. “You felt like it was supposed to be like that, and it was like that. It was nice to kind of break the space down to the bones and give it a fresh, old start because that’s how it used to be. It was nice to make it all pretty and stuff. It’s more inviting.”

Young works with local artisans to sell their clothing and gift goods in the store.

“We have a lady that makes mittens and a guy that makes guitar and driftwood stuff,” she said. “We try to offer Michigan stuff and close-made upcycled items when we can. We’re trying to offer something new and different to bring more people in. Hopefully downtown continues to flourish and do well.”

According to Young, the store has been well received by the community since reopening.

“The town has been so supportive and obviously the community,” Young said. “We live here, we raise our kids here, and my husband grew up here. We’re Buchanan people, so it just made sense and of course [Schau’s] whole family lives in the area, and she went to school here. It’s been awesome.”

Young believes the new-look shop brings something new to a Buchanan community that has grown and changed in recent years.

“It’s just something different,” she said. “The town doesn’t have anything like this, so we wanted to offer something a little bit different down here, especially since the town’s changing. There’s a lot of new people bringing a lot of awareness down here, different clientele and all of that, so it’s been really good for us.”

Young said Facebook has been an important marketing tool for the business, helping Bucktown Boutique draw in customers from Buchanan and beyond. For Schau, meeting new people is one of her favorite aspects of the job.

“We used to just sit in the back and do screen printing, which I loved,” she said. “Now we get to meet and talk to a bunch of people, help them pick out gifts or help them go shopping. It’s just a lot of fun and I enjoy that a lot.”

“We’re from here, so we know a lot of people,” Young said. “It’s nice to see people that aren’t from Buchanan come in and you get to talk to them. That has been fun.”

As the year comes to a close, Young and Schau look forward to what 2022 has in store for the business.

“We get new products all the time,” Young said. “We have stuff on order and obviously shipping has been inconsistent, but we’ve been fortunate to work with some great vendors. We’re excited and happy that it’s going well. It was a good idea and we’re glad we followed through. So far, it’s going well for us.” 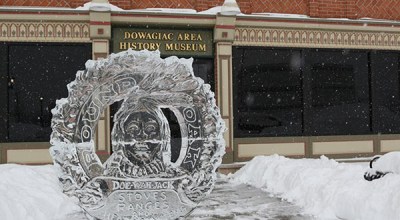