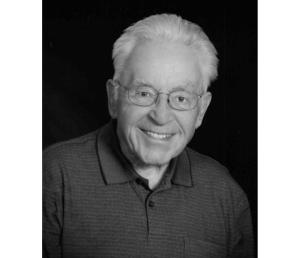 William Thomas Burrows, 95, of Cassopolis, died peacefully Sunday, Dec. 12, 2021, in the comfort of his family’s presence.

Born April 3, 1926, in Detroit, he was adopted by the late William T. and Frances (Yack) Burrows. Bill moved to Niles at age 8. He graduated from Niles High School in 1943. He entered the Navy V-12 program where he studied at Notre Dame and Illinois Institute of Technology in Chicago, receiving his bachelor’s degree in electrical engineering. During WWII, he was stationed on the USS Cleveland (CL-55) in New York and Bermuda. After the war, he began to work for the Indiana and Michigan Electric Company (I&M), where he met JoAnn Phillips; they married on May 13, 1950.

He was called back to the Navy for the Korean War and was stationed on the USS Cavalier (APA-37) in San Diego and deployed to Japan. His military awards included the Victory Ribbon for World War II, American Theater Ribbon, and campaign ribbons for Japanese Occupation, Korean Service (1 Star), United Nations Service and National Defense. He worked at the I&M for forty-three years. He had a great singing voice and was a talented whistler. Bill enjoyed sailing and fishing at Diamond Lake where he lived for 46 years. He taught his children to swim, fish, row, and sail. Bill was always tinkering to improve the function of all gadgets. He also loved going to the movies to watch “creature features” and created award-winning papier mache masks. Bill was a devout Catholic, a member of the Knights of Columbus, and always active in his church. He will be remembered for his devotion to family, religion, work, and country.

He was preceded in death by his parents; one grandson, Aaron Matthew; one brother, Ralph Shagena and one sister, Audrey Burrows.

Bill’s remains will be laid to rest in Fairview Cemetery, Mishawaka.

The family prefers contributions in memory of Bill be made to Our Lady of the Lake Catholic Church, 24832 US 12 East, Edwardsburg, Michigan 49112.