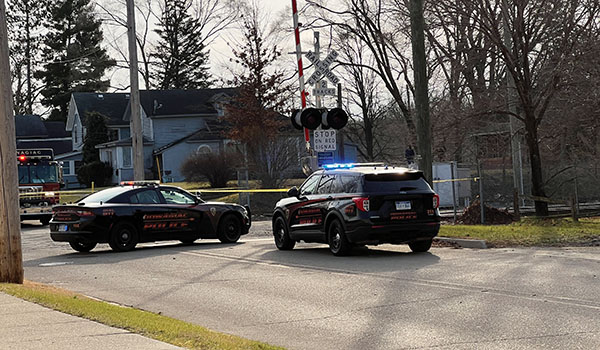 DOWAGIAC — A Dowagiac man was killed in a Thursday morning pedestrian vs. train crash in downtown Dowagiac.

Director of Public Safety Steve Grinnewald reported that his office responded to a pedestrian vs. train crash on Park Place in Dowagiac around 9:50 a.m. Thursday. When officers arrived on the scene, they determined the victim, a 69-year-old man from Dowagiac, was deceased. The victim’s name is being withheld pending family notification.

According to police, the investigation showed that the victim had been at Harding’s near the crossing and was walking east on Park Place. The victim attempted to walk across the crossing as an Amtrak train approached traveling south. Witnesses told police that the victim did not appear to see or hear the train and continued to walk across the tracks and was struck by the train.

The train was stopped for several hours while the incident was investigated.

No other injuries were reported as a result of this incident.

Dowagiac Police were assisted by the Dowagiac Fire Department, Pokagon Tribal Police, Cass County Sheriff’s Office, Amtrak Police Department, Michigan State Police and Pride Ambulance.  Dowagiac police ask anyone with information about this incident to contact them at (269) 782-9743, or the Cass County Tip Line at (800) 462-9328.