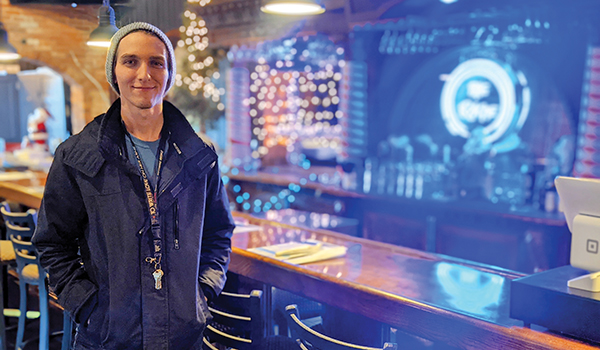 NILES — A popular downtown eatery closed since the onset of the pandemic has made its long-awaited return.

The Rage, 219 N. Front St., opened for business Friday afternoon for the first time since the COVID shutdown. The first few days were a whirlwind for co-owner Chance Smith and his staff, but the experience of being open again was worth it.

“We had some hilarious moments because there were little things on the job that we forgot that we used to do, and it was a matter of reminding ourselves that was how we did this, that was how we made that,” Smith said. “It was just like riding a bike and getting back to the swing of things. Our customers were amazing, and they understood.”

Smith said he and his team used the restaurant’s temporary closure to rebrand. The Rage obtained a liquor license and features a fully-stocked bar with a bevy of drink options available. In addition, Smith said the restaurant is in the process of ironing out a new menu, which he insists will remain gluten-free.

“We got that liquor license, and then it all became ‘how do we kind of rebrand it but not change what people love,’” he said. “I think people really do love the original menu, but we’re just trying to offer some new things while not taking away the things that people love. I think that’s the biggest challenge, but it’s kind of fun because I think people like seeing some new things added to the menu and things like that. I think going into the next month is going to be really fun because people will see a lot of changes happening that I think they’ll be excited to come in and try.”

The Rage has long been a labor of love for Smith and his family. The restaurant first opened in 2019 after a three-year renovation process only to close one year later due to the pandemic. Now that the restaurant has returned, Smith believes it will be here to stay.

“It’s one of our favorite buildings downtown,” he said. “I think just the size of the building and everything is why we’re so excited to incorporate it with our events, especially when spring and summer get here and we can expand on to the patio and things like that.”

For Smith, The Rage is a restaurant where the past meets the present, a destination restaurant that will bring family and friends together in downtown Niles.

“I think this building just has a lot of great history behind it and we’re happy to bring back those things,” Smith said. “We’re always listening to people to figure out what they remember from this building in the ‘70s and ‘80s. I think that’s the biggest thing that we’re excited for is kind of just to keep the old traditions and start some new ones with this building.”