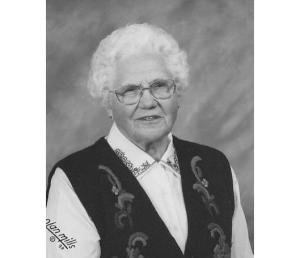 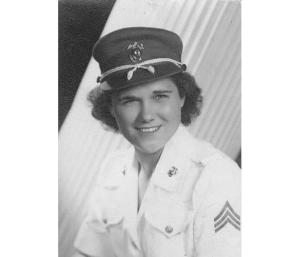 Lillian Ann Luckey, of Niles, passed away on Dec. 13, 2021, at the age of 102 years old. She was born in South Bend, Indiana on July 9, 1919, to the late Albert and Lillian Luckey. Lillian lived in Niles for most of her life. While growing up she graduated from Niles High School. She played amateur softball from 1933 to 1945 and played on the Mutual Drug team in Niles. In 1935, the team played in the first game at the opening of Plym Park in Niles and hit the first recorded home run in the park. The team went on to win the 1940 State Class C championship.

She enlisted in the Marine Corp in 1943. During her time in the Marines, she achieved the rank of Sergeant as an aircraft mechanic and also played ball for the Marines. While servicing in El Toro, California on July 15, 1945, she pitched a no hit no run game in Mojave against the men’s team. She received an honorable discharge in 1945.

When she arrived home from the Marine Corp she began working for Tyler’s in Niles. When they went on strike, she got a call from the newly formed All-American Girls Professional Baseball League. They asked her to pitch for the South Bend Blue Sox. She played a year with them in 1946 until she retired from baseball and then became a first base coach for the Sox.

After playing with the Blue Sox, she spent five and a half years with the Medical Mission Sisters in Philadelphia Pennsylvania. Lillian then went to work as a secretary in the Niles school system in 1959 where she retired after 25 years in 1984.

During the time she was secretary she took up golf and became very good at it and played in two leagues per week. She also bowled in various leagues until undergoing knee replacement in 1994. She also enjoyed line dancing and swimming.

She was a devoted Notre Dame fan and held season tickets for football and girls’ basketball teams. It didn’t matter what the weather was she didn’t miss the football games. In September of 2003, she was inducted into the Baseball Hall of Fame in Cooperstown as a member of the AAGPBL.

Burial will be in Chapel Hill Memorial Gardens in Osceola, Indiana with family members only. There will be a family Celebration of Life at a later date.

In lieu of flowers, memorial contributions may be made to Christ the King Catholic Church in South Bend, Indiana.

Services have been entrusted to Chapel Hill Funeral Home.