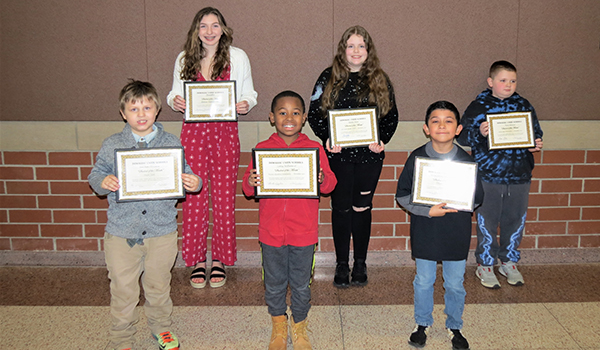 DOWAGIAC — Six local students have been selected for recognition by teachers and faculty for their outstanding performance in school this November.

Nominated by teachers and faculty from their respective schools in the Dowagiac Union School District, Kane Benson, Rogan Dodd, Abbey Dobberstein, Emily Hunt, Corey Williams-el and Oliver Olmedo were named Students of the Month. They received certificates and T-shirts with their names on them for their accomplishments and attitudes in the classroom.

Benson, a third-grader at Justus Gage Elementary, was nominated by teacher Allison Yeo. Recently, Benson proved how kind and generous he was recently by buying popcorn for a fellow student who could not afford it, according to principal Bryan Henry. Benson said he wants to be a police officer when he grows up.

“He is an amazing young gentleman,” Seppala said. “[He’s] reliable, responsible, hopeful, honest and dedicated to Sister Lakes. He comes to school and is willing to do whatever is asked of him. … He puts himself out there, and he’s just an amazing student and I’m so proud to call him my student.”

Dobberstein is a sophomore at DUHS and was nominated by math and science teacher Andrew Hackett. Her favorite classes are science and English, and she has been a straight-A student. She plays varsity volleyball and also enjoys soccer.

“Emily has been a true silver lining in this difficult year,” Buyner said. “She has faced every challenge head-on and truly taken advantage of getting the most out of her education. She values each learning opportunity and actively participates in all of our lessons. She is not afraid to show leadership and help those who may be struggling. … I expect great things for her future.”

Schuur said Hunt is a natural leader who is wonderful singing lifting up those around her.

“When people are distracted, I stay focused on my learning,” Hunt said. “That’s what you should do too. If you do that, you can be successful in school. That’s how I’ve done it, and that’s how you can do it.”

Williams-el, a third-grader at Patrick Hamilton Elementary, was nominated by teacher Laura McIntyre, who said his desire for knowledge was great.

“When he was told he was student of the month, you should have seen the smile on his face,” McIntyre said. “Corey is a very conscientious student. He wants to do his best and always participates in class. He is a great leader in the classroom, as well as when we go outside for recess. … He organizes everyone when they play the games and makes sure everything is fair.”

Olmedo, nominated by teacher Jon Leazenby, is a third-grader at Kincheloe Elementary. He would like to be a police officer when he grows up.