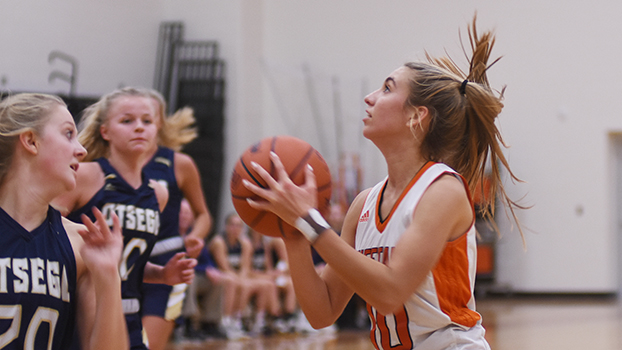 DOWAGIAC — Despite being short-handed, including missing its leading scorer, the Dowagiac girls basketball team gave visiting Otsego everything it had in a Wolverine Conference non-divisional contest Friday night.

Due to injury and quarantine, the Chieftains dressed just six players against the undefeated Bulldogs. But that did not keep Dowagiac from leading 7-4 after one quarter and 13-12 at halftime.

Otsego (5-0) regrouped during the intermission and outscored Dowagiac 31-10 in the second half to earn a 43-23 victory.

According to Coach Jason Turner, the Chieftains ran out of gas in the second half.

“A great effort,” he said. “We had six girls that played tonight, and all of them played at least 30 minutes probably. We played hard. Finally, our defense, especially in the first half, played together as a team, we communicated and talked. Everything we do in practice finally transferred to a game. I don’t know why it did when we only had six people, instead of when we had our whole team, but it was nice to see that effort.”

The Bulldogs came out with more energy than they played with in the opening 16 minutes. That translated into putting more pressure on Dowagiac, which began to take its toll physically.

After three quarters, Otsego led 32-17 and then outscored a worn-out Chieftain squad 11-6 in the final quarter.

Cali Miller scored a game-high 19 points to lead the Bulldogs, who also got nine points from Hannah Fitzpatrick.

EDWARDSBURG — For the second time in a young season, host Edwardsburg blew out a Wolverine Conference foe.

The Eddies (2-0) opened their season with a 76-6 South Division win over Sturgis. Friday night, Edwardsburg scored 35 points in the opening quarter on its way to an 86-15 non-divisional victory over visiting Allegan.

Macey Laubach scored a game-high 24 points to lead Edwardsburg, which also got 20 points from Katie Schaible and 13 points from Ella Castelucci. Caitlin Tighe finished with 12 points.

HARTFORD — A slow start allowed host Hartford to build a 10-point lead in the first quarter of its 57-38 Southwest 10 Conference victory Friday night.

The Rangers trailed 23-13 at halftime and 41-24 heading into the final quarter.

Jadin Wolfe was the lone Cassopolis player to reach double digits as she scored 12 points. Alexis Millirans had seven points and Quianna Murray six points for the Rangers, who dropped to 1-1 overall and in Southwest 10 play.

Allison Daugherty had a game-high 14 points to lead Marcellus, which also got 11 points from Brooklyn VanTilburg.

Buchanan falls to Berrien Springs in final seconds of…