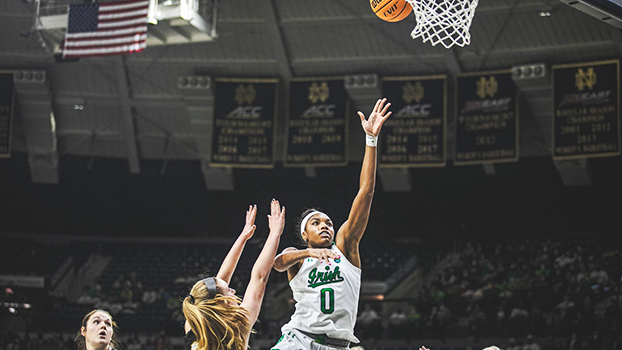 NOTRE DAME, Ind. — “The Ring of Honor is only the beginning. There will also be a statue out front.” University Vice President and Director of Athletics Jack Swarbrick ended Muffet McGraw’s Ring of Honor ceremony with those words and to a loud roar of applause from the Irish faithful in attendance at Purcell Pavilion on Sunday afternoon.

Shortly after, the No. 22 Notre Dame women’s basketball squad (9-2) rolled to a 78-41 victory over the Purdue Fort Wayne Mastodons (4-6). It marked the third time this season the Irish defense held an opponent to 50 points or less. In addition, the Irish remain undefeated in Ring of Honor games, moving to 7-0.

The Notre Dame offense didn’t get rolling until 4:32 in the first, but once things began to click, the Irish never looked back. From 4:32 to the end of the quarter, the Irish outscored the Mastodons 16-2 to go up 16-7. The quarter ended with Citron driving the court and beating the buzzer with a swift move for the layup.

The Irish recorded eight made field goals in the second quarter. What’s interesting to note is that they all came from different players: Marshall, Brunelle, Mabrey, Dodson, Westbeld, Miles, Peoples and Prohaska. The Notre Dame defense then did its part, giving the home squad a 34-22 halftime lead.

The Irish outscored the Mastodons 22-13 in the third. Dodson and Westbeld were each in double figures by the end of the period with 13 and 12 points, respectively. The Irish shot 10-of-17 and continued to spread the wealth with seven different scorers.

Miles and Peoples kicked off the fourth on a combined 11-0 run over the first three minutes before outpacing Purdue Fort Wayne 22-6 in the quarter. The Irish ultimately shot 47.8 percent in the game and registered 50 points in the paint.

The Irish will have a week off for final exams before an ACC matchup with Pitt on Sunday, Dec. 19. That matchup will tip inside Purcell at 2 p.m. on ACCNX. The Irish look to go 2-0 in league play before regular ACC play kicks off after the Christmas break.