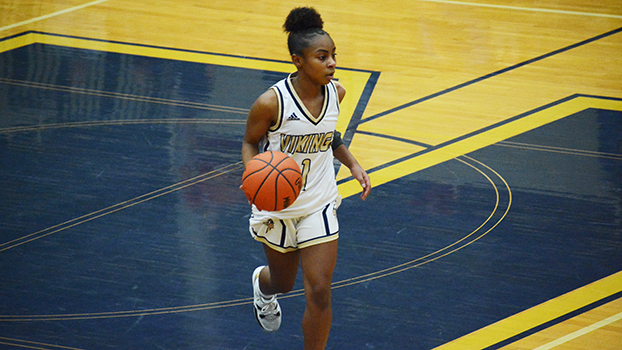 NILES — By the end of the first half, it looked as if the Niles girls basketball team had the game in control against Paw Paw at home Friday night.

The Vikings led by as many as eight and were a few plays away from blowing the game wide open. Then came the second half.

Niles scored 15 points in the final 16 minutes as Paw Paw rallied to earn a 40-36 victory.

The shorthanded Vikings were without the services of junior Ayshia Smith due to injury and senior Natalie Lucero, who was out with an illness. The loss was a tough blow for a team coming off a 64-58 overtime loss to Three Rivers last week.

“We have those highs and lows, and when we’re low, it takes a while to get to pick each other up,” said Niles Coach Jessica Johnson. “The girls are struggling. They were exhausted.”

Already down to a seven-player rotation without two key playmakers, two quick foul calls on Kamryn Patterson took her out of the game for most of the first half and further hampered the Vikings.

“We didn’t have very many people on the bench today,” she said. “It makes it difficult with subbing, especially with Kamryn getting in foul trouble early on. Luckily, she was able to play the game.”

Niles led by as many as eight before taking a 21-14 lead at halftime. In the second half, Niles struggled to generate offense as Paw Paw overcame its own struggles by grabbing offensive rebounds and turning them into second-chance points.

“Our girls would make big plays and then they would be exhausted,” Johnson said. Yeah. “Then we’d take a break, make a big play and be exhausted again. I was as proud of Amara stepping up and handling the ball more. She’s still working on that, but I was happy with how she played.”

Fatigue and frustration set in during the fourth quarter when Patterson picked up a technical foul trying to maintain possession of the ball.

The Red Wolves made seven of their 16 field goals in the second half and used a 12-4 fourth-quarter run to ice the game away.

The Vikings (1-2, 0-2 Wolverine) will look to stop their two-game losing streak when they travel to face Otsego at 7:15 p.m. Tuesday. Johnson expects Lucero to play next week and said Smith would return to practice over Christmas break. Their return will help a team in need of additional scoring and ball-handling options.

Palmer and Patterson have combined to score 109 of the Vikings’ 151 points this season, good for 72 percent.

“We do ball handling in practice every single day,” Johnson said. “It’s just a matter of getting comfortable with it. It’s more of a mentality thing than anything else. The girls have the skill, but then that pressure comes on and panic sets in.”