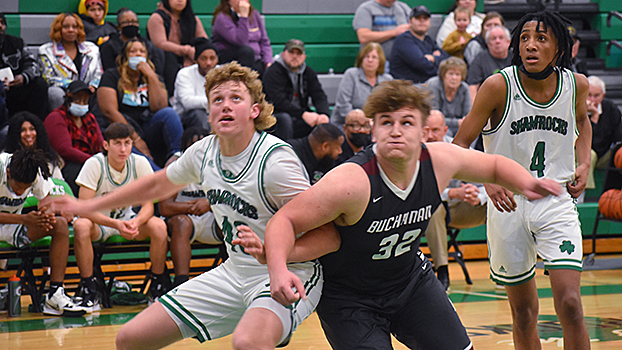 For a team returning just one starter from last season, Bucks Coach Reid McBeth said he was proud of his team’s defensive effort after a 50-47, last-second defeat at the hands of the Shamrocks on the road.

“To be able to compete like that in a conference game and battle, I thought they did a good job,” McBeth said. “So, not the outcome we wanted, but you want your kids to show up to compete every night, and I thought we did that tonight.”

The Bucks (0-2, 0-2 BCS Red) outrebounded the Shamrocks 49-34 and built a six-point halftime lead thanks to some hot shooting from beyond the arc.

“Hats off to Buchanan,” said Berrien Springs Coach Craig Blasko. “They played really hard. They hit some good shots. They were more ready than us. I don’t think we turned it around until probably the end of the third quarter. We were fortunate to win that game.”

“We had to realize and adapt to the team that we were playing,” York said. “And I was able to improvise. We just kept our head in the game and did not drop our heads. Defense was a big [adjustment]. We had to realize that we can’t be in foul trouble. We had to stop fouling and we had to adapt. We have to look for teammates. We have to play for each other.”

“Those guys have been playing varsity basketball since they were freshmen, so we knew they were good basketball players,” McBeth said. “[York] is an outstanding athlete, but I still thought we did a good job. Our defensive effort was outstanding.”