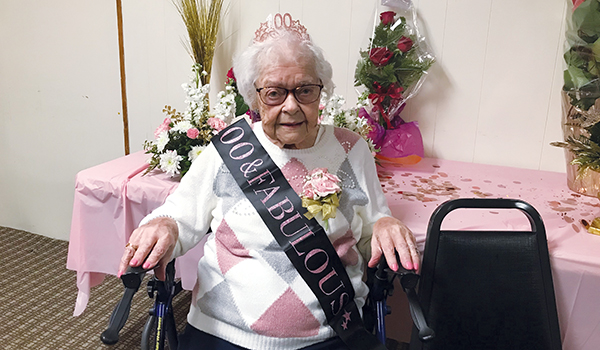 DOWAGIAC — One local woman never thought she would live to see her 100th birthday, but now that she is almost there, she would like to live a few more.

A longtime resident of Dowagiac, Archer said she and her husband, Orval Archer, bought a cattle farm when they got married about 72 years ago, and operated the farm for decades until Orval’s passing. Archer said the two lived off the land, growing grain, eating the meat and drinking milk from the cows as well as and growing their own vegetables.

“I think that’s maybe what made me healthy,” she said. “I miss it, too. I always had my own canning and freezing and all that.”

Archer, who still lives on her own, said she stays active any way she can. She has kept busy with knitting, sewing and baking, though she said she needs a new pair of glasses so she can see better and hasn’t done much cooking lately. She said she used to make wedding cakes and quilts, some of which were on display at the party.

She is still mobile but has used a walker since sustaining a broken femur two years ago, according to her younger sister, 81-year-old Louise Duffey.

Archer was the oldest of 12 siblings, including four sisters who are still living independently – Duffey, Betty Schoetzow, 92, Millie Miller, 88, and Marian Shemick, 78.

“We’ve got longevity in us girls,” Duffey said. “I guess it’s just the way we live, I don’t know. We just take care of ourselves and that’s it.”

Duffey describes Archer as a mellow personality and said she does not drink alcohol – though she used to enjoy a wine cooler or two.

“She’s the mentor to the rest of us,” Duffey said. “We still look up to her because she’s the oldest, and she’s always there. No matter what the party is, or why, she is always there. She’s like an Energizer bunny, she just keeps going.”

Archer said while she is turning 100 soon, she’d like to live on a little bit longer.

“I’m grateful to see everybody,” she said. “Having all the grandkids and family come, I love that.”