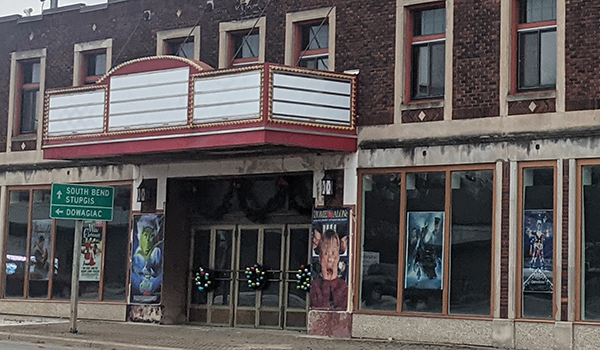 NILES — No, the Ready Theatre is not reopening — but thanks to a local organization, the historic Niles building has caught the collective attention of the Niles community.

The River Essence Group has decorated the Ready Theatre facade for the holiday season, according to Ready Theatre and Wonderland Cinema co-owner Scott Moore, of Moore Family Pictures.

Classic Christmas movie posters can be seen in the building’s front-facing windows and wreaths have been placed on the doors. Christmas trees and presents can be viewed through the windows of the building’s add-on structure.  Moore turned on the marquee lights for the holiday season and plans to add letters to the marquee soon.

Moore said he was approached by River Essence Group president Vikki Jurgonski asking if the group could decorate the front of the theater and lighting up the marquee for the holiday season.

“She said she had been working all summer long to spruce up downtown Niles,” Moore said. “Trimming the trees, using different planters, that sort of thing. Downtown Niles starts with the Ready Theatre, and she had this vision to put something in the windows and spruce it up a little bit.”

Opened in 1927, Ready Theatre was once one of the premier movie theatres in southwest Michigan. Purchased by Moore Family Pictures in the early 1980s, the building reopened in 1983 before closing its doors in January 2005.

While Moore did not anticipate the number of calls, texts and social media posts that would appear in the days following the decorating, he was happy to see how much the decades-old theater means to so many people.

“I love the community in Niles,” Moore said. “They’ve supported us since the beginning and they keep coming back.”

Since closing, the Ready Theatre experienced renovations and remodeling under the direction of former MFP project manager Joe Chabot, who passed away in 2015.

“He had a vision,” Moore said. “We took the screens away, so now it’s one open auditorium. He had a vision of maybe showing an older movie on the big screen as well as maybe doing something with our acoustics.”

A 25-foot strip of property between the theater and the Four Flags Hotel building was purchased and a space originally set to house a bar area and restrooms was built there. Moore said that several factors in recent years, including Chabot’s passing, the company’s acquisition and remodeling of JC Cinema in Battle Creek in 2017, flooding that damaged Wonderland Cinema in 2018 and the ongoing COVID-19 pandemic have put concrete plans for the Ready Theatre on the backburner.

“It seems like it gets pushed back farther and farther,” Moore said. “Could a venue survive just being open on weekends? What would the final costs look like? We’re not fully starting over, but I’d say we’re 40 percent of the way there.”

The current staffing shortage is an issue that has reached Moore and MFP’s five locations — JC Cinema, Wonderland Cinema in Niles, M-89 Cinema in Otsego, Loma Theatre in Coloma and Michigan Theatre in South Haven.

“We need to concentrate on our day-to-day operations at Wonderland,” he said. “We’re short-staffed. We have a cafe area off to the side that we can’t open. Myself and my family are working at each of the five locations just to fill staff shortages.”

The community’s interest in future plans for the space have not gone unnoticed by Moore and his company, but he reiterated that the space in its current state is not ready for large activity.

“Lots of people have different ideas on what should happen and what should go in there,” he said. “‘Could we do this there?’ Well, you don’t have a bathroom. There are no restrooms, and I don’t even think there is a sink in the building. You can’t even wash your hands.”