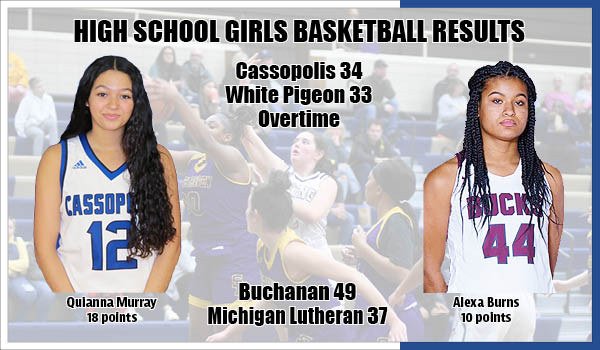 The Rangers outscored host White Pigeon 5-4 in overtime to edge the Chiefs 34-33 in the season and Southwest 10 opener for Cassopolis Tuesday night.

Cassopolis is back in action Friday as it heads to Hartford for another Southwest 10 Conference contest.

ST. JOSEPH — The Bucks remained undefeated as they knocked off the host Titans 49-37 in a non-divisional BCS Athletic Conference contest Tuesday night.

After three quarters, Buchanan (3-0) turned an eight-point halftime lead into a 39-29 advantage. The Bucks, who continue to play without center Faith Carson, were never challenged in the final eight minutes of play.

CENTREVILLE — The Wildcats led 14-12 after eight minutes, but outscored the Bulldogs 38-32 over the final three quarters to pull away to their Southwest 10 Conference victory Tuesday.

Faith Edwards had 16 points for Centreville.