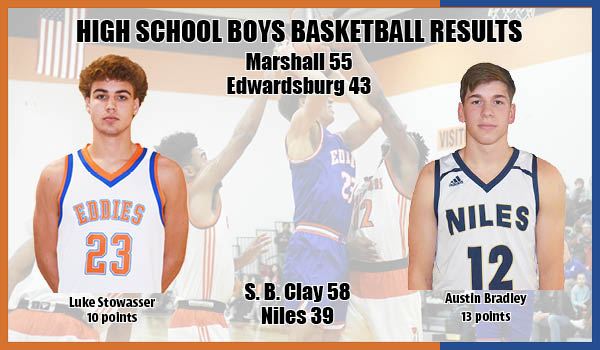 Despite allowing the Vikings to connect on eight 3-pointers, the Colonials were able to defeat Niles 58-39 to square its record at 2-2.

The Vikings trailed 15-8 after the opening quarter and 27-15 at halftime. Clay scored 31 points in the second half while holding Niles to 24 points.

Miguel Henry scored a game-high 19 points to lead the Colonials, who also got 15 points from Ameer Harris and 10 points from Alex Wroblewski.

MARSHALL — Host Marshall turned a three-point lead after one quarter into a 12-point victory over Edwardsburg Tuesday.

Marshall was led by Nauvion Burnett, who scored a game-high 17 points.

COLOMA — Visiting Buchanan could not overcome a slow start in its season-opening 59-41 non-conference loss to Coloma Tuesday night.

Ryan Young scored a game-high 16 points to lead the Bucks, who also got nine points from Dillon Otasvall and six points from Thomas VanOverberghe.

Jake Ickes led the Comets with 13 points. Cannon Hodges and Cameron Schinck both finished with 12 points.

The Bucks return to the court Friday when they travel to Berrien Springs for the BCS Athletic Conference Red Division opener.