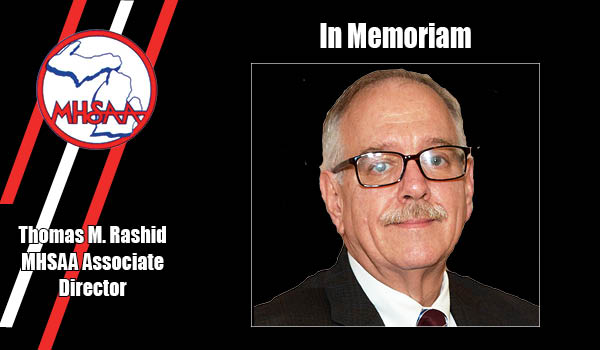 EAST LANSING — Thomas M. Rashid, who served as associate director for two executives during 18 years with the Michigan High School Athletic Association, died Friday after a battle with cancer. He was 66.

Rashid became lead assistant to retired executive director John E. “Jack” Roberts in 2003, and continued serving in that position after Roberts’ retirement and the selection of Mark Uyl as the next MHSAA leader in 2018.

Rashid was best-known by the athletic directors who have served the MHSAA’s 750 high schools, as Rashid often was their first call with questions regarding the MHSAA Handbook or eligibility issues. Rashid also led the annual UPDATE meetings tour, during which he would provide training and answers on the latest rules changes at stops all over the state. He coordinated and presented orientations each fall for newly-hired athletic directors and also presented annual sessions to administrative assistants.

He served as the MHSAA’s administrator of boys lacrosse for its entirety as an MHSAA-sponsored sport, beginning in 2005, and also oversaw the MHSAA’s Charles E. Forsythe, Allen W. Bush and Vern L. Norris awards programs.

“We are heartbroken with the loss of our dear friend and colleague, Tom,” Uyl said. “He had so many incredible gifts, the greatest being his ability to talk and communicate with people even when having to share difficult or bad news. He was so good with people, and his care and concern for others is one of Tom’s greatest legacies.

“So many of us are hurting because Tom was such a special man who made impacting people and school sports in our state his life’s work and passion. His example and legacy of helping others will live on within the MHSAA community for years.”

Prior to joining the MHSAA staff, Rashid served as director of physical education and athletics for the Archdiocese of Detroit and as director of the Catholic High School League, for 15 years. In those positions, he coordinated athletic schedules and tournaments for the league’s 37 schools. He also served on the MHSAA’s legislative body — the representative council — from 1988 until his hire at the MHSAA, including as the council’s secretary-treasurer.

Rashid graduated from St. Alphonsus High School in Dearborn in 1973. He obtained his bachelor’s degree in history from Eastern Michigan University and his master’s degree in urban education from the University of Michigan-Dearborn.

He became athletic director at St. Alphonsus in 1977, serving in that position for seven years before working in the same capacity at Riverview Gabriel Richard for slightly more than three years until joining the Catholic League staff as assistant director in December 1987. He assumed the Catholic League’s top post the following August.

Rashid sat on the Board of Directors for the Michigan Interscholastic Athletic Administrators Association from 1988-2000 and served as its president in 1998.

He received national recognition in 1999 when he was presented with the National Interscholastic Athletic Administrators Association’s State Award of Merit. In 2001, Rashid was honored with the MHSAA’s Allen W. Bush Award, which recognizes noteworthy behind-the-scenes support to interscholastic athletics. In 2003, Rashid received Athletic Director of the Year awards from the MIAAA and National High School Athletic Coaches Association, and he also received an NFHS Citation that year.

Bucks improve to 2-0 with win over Coloma