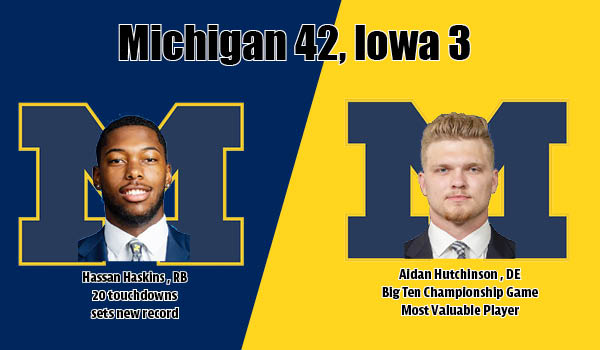 The Big Ten title is the Wolverines’ league-leading 43rd and the first since the conference switched to the two-division alignment in 2011.

With the win, Michigan — ranked No. 2 in this week’s College Football Playoff rankings after beginning the season unranked in the AP and Coaches’ polls — achieved its third-ever 12-win season (1905 and 1997).

The Wolverines will face No. 3 Georgia in the Orange Bowl Jan. 31.

The Wolverines capitalized on back-to-back explosive touchdown plays in the first quarter to jump out to a 14-0 lead, which proved more than enough thanks to the sustained dominance of the stout Michigan defense and Big Ten Championship Game MVP Aidan Hutchinson throughout all four quarters.

Michigan’s offense fully found its stride in the second half, reeling off four touchdowns in five drives for 28 unanswered points to run away with the title. Two of those scores came by the feet of Hassan Haskins, who tied and then ultimately broke the single-season rushing touchdown school record with his 19th and 20th of the season.

Quarterback Cade McNamara went 16-for-24 for 169 yards with a touchdown and an interception, a solid performance against an Iowa defense that entered leading the nation with 22 interceptions. Blake Corum was the leading rusher with 74 yards — 67 of which came on a single touchdown rush — and Roman Wilson led all receivers with 82 yards, 75 of which came in a trick play touchdown pass from Donovan Edwards.

The defense — led again by newly crowned Big Ten Defensive Player of the Year and Heisman Trophy hopeful Hutchinson with his 13th sack of the season — throttled the Hawkeyes all evening long. Michigan limited Iowa to but a single field goal in three red-zone possessions, and allowing conversions on just five of 19 third downs throughout the game and none in the fourth quarter.

The 39-point margin of victory was the Wolverines’ most lopsided win over the Hawkeyes since a 63-7 victory in 1971.

That formidable Michigan defensive unit bent but did not break on the Hawkeyes’ first drive, coming through when it mattered most. David Ojabo dragged down a Hawkeye rusher on an Iowa third-and-five situation at the Michigan 12 yard-line, forcing a 33-yard field-goal attempt that the Hawkeyes missed wide right to keep the game scoreless.

Michigan’s offense was ignited by that spark from the defensive unit. Nearly exactly two minutes of game time later after the missed Iowa field goal, Corum found an opening through the Hawkeyes’ defensive line, juked past a defender in open space to the right sideline and was off to the races for the Wolverines’ first score of the game on a 67-yard run.

Ojabo and the Michigan defense limited Iowa to a three-and-out on the subsequent drive, setting up the Wolverines to resume right where they left off. On the first play from scrimmage, McNamara threw a screen to Edwards, who went toward the right sideline, but, instead of turning up the field, he planted and threw a perfect spiral downfield and hit a wide-open Wilson in stride for a 75-yard touchdown strike. Michigan took a 14-0 advantage with 5:27 remaining in the first quarter, all coming in the span of two consecutive plays.

The defense came up with another big red-zone stand on Iowa’s next possession, as the Hawkeyes came within four yards of scoring before the Wolverines stopped them on third-and-goal to limit Iowa to a 22-yard field goal.

Much of the second quarter proved to be a battle between the two squads’ defensive and special teams units. Iowa pinned Michigan near its own goal line multiple times on punts, and the Wolverine defense held multiple times — forcing a 16-yard-to-go average on four third-down opportunities, none of which were converted by Iowa — despite the Hawkeyes gaining better starting field position near midfield each time. Neither team scored for the duration of the half.

Michigan got back to its scoring ways on its opening drive of the second half, set up by a pair of long passes and solid rushing from Corum and Haskins. After a 27-yard strike from McNamara to Luke Schoonmaker brought the Wolverines down to the Iowa four-yard line, Haskins converted on the next play, going wide to the right and turning the corner untouched into the end zone for a 21-3 lead. The TD was his 19th touchdown run of the season, tying him with Ron Johnson (1968) for the most in a single season in Michigan program history.

Iowa looked poised to answer on its next possession, but the Michigan defense continued to hold the line. The Wolverines faced four plays inside the red zone, but forced a turnover on downs.

Though the offense did not capitalize on the turnover, a booming 64-yard punt from Brad Robbins set up the Michigan defense in strong position deep inside Iowa territory. Hutchinson and Co. did their job once again to force a punt that was blocked by Cornelius Johnson and recovered by Michigan at the Iowa 36 for the Wolverines’ best starting field position by 31 yards.

It took the Wolverines just four plays — including a sensational one-handed catch by Schoonmaker for 22 yards down to the one-yard line — to put seven more points on the board. Haskins punched it in for his second of the day and his school record-breaking 20th touchdown of the season, giving Michigan a 28-3 advantage with just over 11 minutes remaining in the game.

After forcing another three-and-out — the fourth in 11 Iowa drives — the Wolverines marched right back down the field for extra emphasis. McNamara found Erick All for 38 yards up the left sideline, Haskins accumulated 17 rushing yards, punt blocker Johnson ripped a 17-yard rush, and All capped it off with an acrobatic one-handed five-yard touchdown reception from McNamara to give the Wolverines a 35-3 edge with 5:24 left to go.

Michigan put the final touch on the masterful victory with a one-yard touchdown run from Edwards to end the scoring. The 42 points matched the jersey number 42 worn by Tate Myre, one of four victims of the tragic school shooting at nearby Oxford High School. The Wolverines wore multiple decals on their uniforms to honor the victims, and were joined on the field for the pregame coin toss by Myre’s family.