Huskies pull away from Notre Dame in fourth quarter 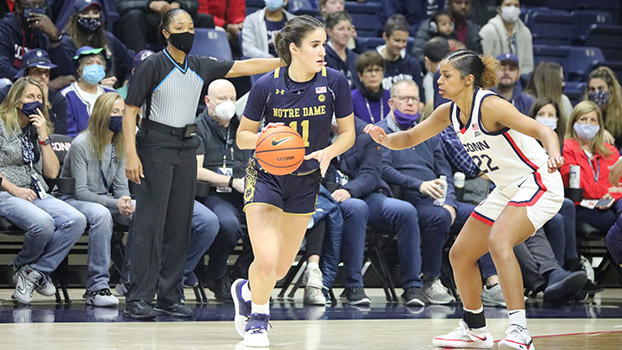 STORRS, Conn. — The No. 24-ranked Notre Dame women’s basketball squad was within striking distance heading into the final quarter down seven points to No. 2 Connecticut, but the Huskies started the fourth on a 13-0 run before earning the final 73-54 victory.

It was Notre Dame’s two freshmen who led the way Sunday inside Gampel Pavilion. Sonia Citron continued her stellar week with a team-high 19 points, the lone Irish player in double figures today. Citron shot 5-of-12 from the field and 7-of-8 from the free throw line, to go with her five boards. Then there was Olivia Miles who stuffed the stat sheet with eight points and a team-high eight rebounds and eight assists.

Dara Mabrey and Sam Brunelle connected from deep early which gave Notre Dame (7-2) a 10-9 lead halfway through the first quarter. The Huskies (5-1), responded with a 7-0 run over a 90-second span to go up by six before Maya Dodson ended the spree to cut it to 16-12 after the opening period.

Citron did her part in the second quarter, scoring eight of the team’s 13 points. Citron had 10 at the break, followed by Sam Brunelle’s five, thus 15 off the bench. UConn held Notre Dame to without a field goal for the final three minutes, finishing on a 10-2 run to go up 35-25.

UConn’s Olivia Nelson-Ododa was a problem on the glass in the first half, reeling in nine rebounds (five offensive) to go with her 12 points at the break. Paige Bueckers had 10 points at the half.

Mabrey provided a spark in the third, connecting on a pair of three-pointers along with two Miles’ layups. Notre Dame later ended the quarter on a 7-2 scoring run to pull within 51-44.

However, the game got out of reach in the fourth when UConn opened it up with a 13-0 scoring run behind three-pointers from Bueckers and Caroline Ducharme to put the home team up 20. Citron added five more points in the fourth to bring her total 19 in the game and 48 for the week. Bueckers led for UConn with 22 points on 9-of-17 shooting.

The Irish stay on the road but return to the state of Indiana with a short trip to Valparaiso Wednesday. Then, Notre Dame finally returns to Purcell Pavilion Sunday, Dec. 12 for Muffet McGraw’s Ring of Honor game. The pre-game ceremony is scheduled to begin shortly after 1:30 p.m. with the game tipping off against Purdue-Fort Wayne at 2 p.m.