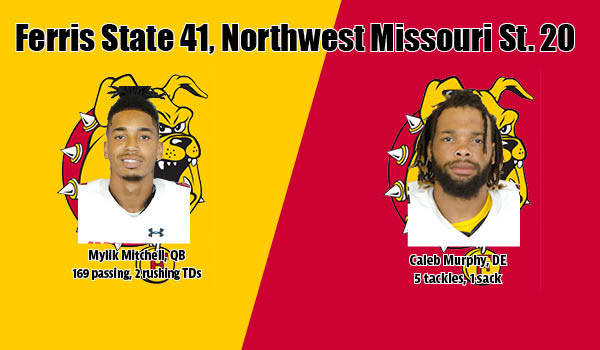 With the win, the Bulldogs will next play in the national semifinals Saturday, with the opponent, site and time set to be announced by the NCAA.

For the second consecutive week in the D2 Playoffs, the Bulldogs bolted in front early. Ferris State marched down the field behind the play of quarterback Mylik Mitchell, who earned the start with Jared Bernhardt out due to injury.

Mitchell engineered an eight-play, 65-yard jaunt before giving way to junior quarterback Evan Cummins, who scored on a 13-yard carry only 5:10 into the contest.

However, the Bearcats answered by moving 75 yards in eight plays and pulled within a point on Braden Wright’s 19-yard TD throw to Jamar Moya. The extra point was no good.

Ferris State pushed its advantage to 14-6 when Mitchell scored himself on a 36-yard carry with 2:53 to play in the first stanza, finishing a 71-yard drive.

The Bulldog lead grew to 20-6 when Mitchell found Xavier Wade on a 20-yard scoring throw early in the second period, but Northwest Missouri State responded and pulled back within 20-13 on Al McKellar’s 31-yard run with 10:51 left in the half.

Ferris State, though, pushed the advantage back to two scores just before halftime when Mitchell capped an 11-play, 58-yard drive with a seven-yard touchdown run to make it 27-13.

The Bulldogs increased their lead midway thru the third period as tailback Jeremy Burrell rambled in from five-yards out to give FSU a 34-13 lead and then following a goal line stand by the Ferris State defense, fellow senior back Tyler Minor raced 84 yards to the end zone to make it a 41-13 contest.

The final points of the day came on Wright’s 11-yard touchdown throw to Kaden Davis with only 7:25 left for the Bearcats.

Overall, the Bulldogs totaled 413 yards of offense to 379 for Northwest Missouri State, but the FSU defense also came up with four turnovers.

Mitchell completed 12-of-19 throws for 155 yards and added 81 yards on the ground with two scores. Minor ran for a team-high 99 yards rushing while Marcus Taylor and five catches for 47 yards and Xavier Wade hauled in two passes for 51 yards.

The Bulldog defense was led by senior Cyntell Williams, who notched seven tackles. Caleb Smith had six stops along with a tackle for loss and an interception. Former Dowagiac standout Caleb Murphy had four tackles, including a sack.

Ferris State improved to 12-0 overall this year by beating the Bearcats for the third consecutive time in the NCAA Division II Playoffs.