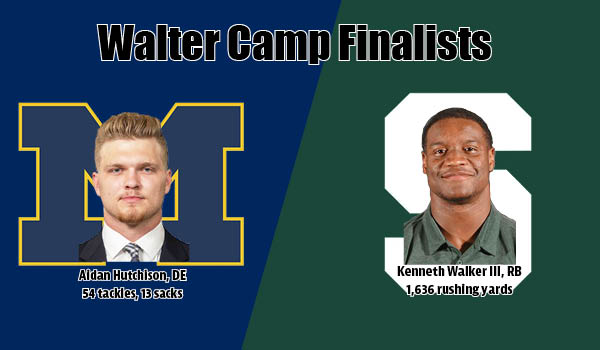 The 2021 Walter Camp Player of Year recipient, who is voted on by the 130 Football Bowl Subdivision head coaches and sports information directors, will be announced on Thursday, Dec. 9 on The Home Depot College Football Awards show on ESPN.

Previously named a finalist for the Maxwell Award and the Doak Walker Award, Walker was named the Big Ten Running Back of the Year on Wednesday. He was also named to the All-Big Ten First Team, a first for a Spartan running back since Le’Veon Bell in 2012.

Walker has led the Big Ten in rushing all season and currently ranks second in the FBS with 1,636 rushing yards (136.3 ypg). He leads the FBS in rushing yards after contact (1,154), 20-plus yard carries (21) and missed forced tackles (89), and also ranks among the nation’s leaders in 10-plus yard carries (tied for second with 46), total touchdowns (tied for fourth with 19), rushing touchdowns (tied for fifth with 18), yards from scrimmage (sixth with 143.8 yards per game), all-purpose yards (eighth with 143.8 yards per game) and yards per carry (14th with 6.2 average).

Through 12 games in the regular season, Walker has collected 1,636 rushing yards, the fourth most by a Spartan in a single season in school history. Walker was the fastest Spartan to reach 1,000 yards in a single season in terms of carries (153 carries). In addition, his 18 rushing touchdowns are tied for fifth most in an MSU season, and his 19 overall touchdowns (one receiving score) are tied for fourth most.
A standout all season, Hutchison, the two-time team captain and Big Ten Woodson-Nagurski Defensive Player of the Year, is Michigan’s third-leading tackler with 54 stops (32 solo). He set a new program sack record with 13 and counting through 12 games, a figure that ranks third nationally. Hutchinson had three sacks against Ohio State in the U-M win, more than the Buckeyes had allowed to a full team this season, and his 15 quarterback hurries in that game as measured by Pro Football Focus College are the most in a single game since the stat has been measured. The service grades Hutchinson as the No. 1 player in the country on defense (93.8).

Jabrill Peppers (2016) was U-M’s last finalist for the award, and Hutchinson is the fourth in program history. The only two U-M players to win it are Desmond Howard (1991) and Charles Woodson (1997).

The other three finalists for the 2021 Walter Camp Player of the Year Award are: Georgia senior nose tackle Jordan Davis, Pittsburgh senior quarterback Kenny Pickett and Alabama sophomore quarterback Bryce Young.
No 2 Michigan (11-1, 8-1 Big Ten) and No. 11 Michigan State (10-2, 7-2 Big Ten) will find out their bowl destination on Sunday.