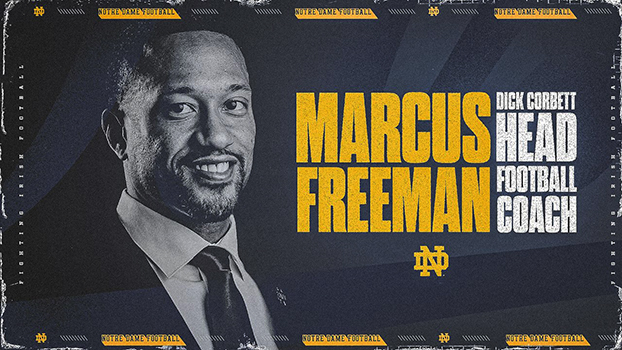 NOTRE DAME, Ind. — Marcus Freeman, one of the rising young stars in the profession and architect of the highly-ranked Fighting Irish defense, today has been named the 30th Head Football Coach at the University of Notre Dame.

Freeman will be introduced at a 2 p.m. Monday press conference, and will coach the Irish in their upcoming bowl game.

“It is an honor to be named the head coach of Notre Dame Football,” Freeman said. “I am eternally grateful to both Father John Jenkins and Jack Swarbrick for giving me the opportunity to lead the exceptional men who make this program what it is. Notre Dame is a very special place, and I look forward to pursuing a national championship with the most outstanding student-athletes, coaches and staff in college football.”

“Marcus Freeman has not only proven himself a superb football coach, he has shown — both in his time at Notre Dame and in my conversations with him this week — that he is a person of highest integrity who cares deeply about our student-athletes and is committed to their success in the classroom as well as on the field,” said University President Rev. John I. Jenkins, C.S.C. “I am excited to welcome him as our new head football coach, and to have his wife, Joanna, and their six beautiful children in the Notre Dame family.”

“Marcus’ ability to connect with people, his fit at Notre Dame and the way he coaches young men set him apart as we went through our search process,” said University Vice President Director of Athletics Jack Swarbrick. “I can’t wait to see how the culture created by these remarkable student-athletes continues to grow under the tutelage of Marcus and his staff.”

In his first season with the Irish, he led a transformation on the defensive side of the ball that includes a number of Top-20 national rankings. The Irish rank sixth nationally in interceptions (15) and defensive touchdowns (4), seventh in total sacks (40.0), 11th in turnovers gained (23) and scoring defense (18.2) and 18th in third-down conversion percentage (.329). The 40.0 team sacks are one shy of the program record of 41 from the 1996 season.

Freeman has overseen sophomore Isaiah Foskey’s breakout season as a starter on the defensive line. Foskey has tallied 10.0 sacks this year, the fourth-most in program history for a single season. The depth of the Irish defense has been on full display in 2021 as 15 different players have recorded a sack, and 21 different players have had a tackle-for-loss. The 15 interceptions are the most in a single season since 2014, when the Irish had 16. In November, the Irish had three-straight games without allowing a touchdown for the first time since 2012.

Prior to coming to South Bend, Freeman spent the previous four seasons as the defensive coordinator at Cincinnati. During his time with the Bearcats, he was named the 2020 247Sports.com Defensive Coordinator of the Year and 2020 Broyles Award Finalist, along with a nominee for the Broyles Award in 2019 and 2018.

In 2020, the Bearcats (9-1) earned a bid to the Peach Bowl as the No. 8-ranked team in the nation and won the American Athletic Conference Championship, the program’s first outright league title since 2009, when Cincinnati’s head coach was Brian Kelly.

Freeman coached the Bearcats to back-to-back 11-win seasons in 2018 and 2019, the 2019 American Athletic Conference East Division Championship and consecutive bowl-game wins in the 2018 Military Bowl and 2019 TicketSmarter Birmingham Bowl.

Freeman joined the Bearcats staff after a four-year stint at Purdue. He coached linebackers all four seasons and served as the Boilermakers’ co-defensive coordinator in 2015.

Prior to his time at Purdue, Freeman coached linebackers at Kent State from 2011-12, helping develop all-conference selections Luke Batton and C.J. Malauulu.

Freeman started his coaching career as a graduate assistant coach at his alma mater, Ohio State, in 2010 and the Buckeyes went 12-1 with a victory in the Sugar Bowl.

During his playing career, Freeman was a four-year letter winner for the Buckeyes from 2004 to 2008. He played under current Cincinnati head coach Luke Fickell. He earned second-team All-Big Ten honors in 2008 while helping lead Ohio State to four conference titles, three BCS bowls and two trips to the national title game during his career.

He played in the 2009 Senior Bowl and was a fifth-round draft pick of the Chicago Bears, spending time with the Bears, Buffalo Bills and Houston Texans before a medical condition ended his playing career.

Freeman graduated from Ohio State in 2007 and returned to the classroom to earn his master’s degree in 2011.

Second half rally comes up short for Dowagiac