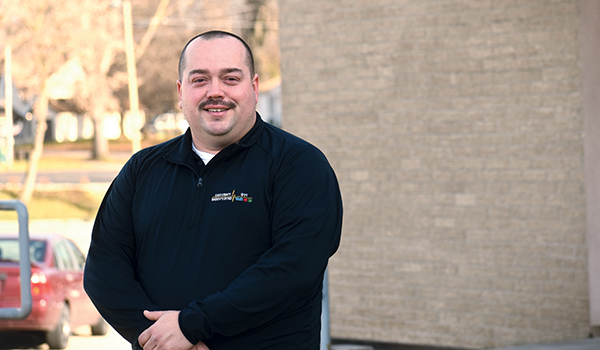 SISTER LAKES — Sister Lakes Volunteer Fire Department Chief Anthony Lozada has had civic duty on the brain since he was a teenager. Joining the department in 2002 at the age of 17, the Keeler Township resident has spent the past two decades fighting fires and serving the community.

“I joined the department as soon as I could,” he said. “Public safety has been my passion since I was young. I feel fortunate to do what I do.”

Recently, Lozada was recognized on a nationwide scale for his commitment both to his department and the community.

“Civic volunteerism is the lifeblood of small town and rural America,” program representatives wrote on the award’s website. “STACVA is intended to help address this critical shortage by recognizing and supporting ‘hometown heroes,’ and by promoting best practices designed to spur a cadre of new civic volunteers to fill these vital roles.”

This year, Lozada was one of more than 700 nominees from across 49 states.

Lozada was nominated for the award by Silver Creek Township Clerk Lori Behnke. In her nomination, Behnke said Lozada’s dedication to the community does not end at fighting fires. He donates time to running safety programs at local camps and schools, participates in local food drives and facilities free smoke alarm giveaways, among other community activities.

At the fire department, he has worked to improve response times, written and received a grant for updated personal protective equipment and air packs for all members of the fire department, and spearheaded the efforts to add a second fire station in Sister Lakes. That station is expected to be operational in 2022.

“Anthony clearly loves his community – all of his community, not just his own department. He refers to his firefighters as ‘rock stars’ and is always focused on the next improvement,” Behnke wrote in her nomination. “Anthony is a positive, driven leader in our community. He is a true professional in this demanding volunteer position.”

While Lozada said he was honored by the nomination, he does not search for accolades. Instead, he said his team at the Sister Lakes Volunteer Fire Department are the ones who deserve praise for the department’s success.

“This isn’t why I do what I do. I don’t do anything for the recognition — that’s just not me,” he said. “I look at it as the fire department does well because of the membership it has. Those guys are the driving force behind that place. They are the ones who make that place look good. I steer the ship, but I give them all the credit. I’ve got the best guys in the business as far as I’m concerned.”

In keeping with the Small Town America Civic Volunteer Award’s mission of inspiring change and civic service, Lozada said he would encourage any resident to get involved in their communities and give back.

“[The fire department] is always looking for more volunteers,” he said with a laugh. “But really, people should get involved in their communities in any way that they can. There is so much negativity in the world that if people were to apply themselves and get out and help and do things, that would solve problems. There wouldn’t be so much negativity.”