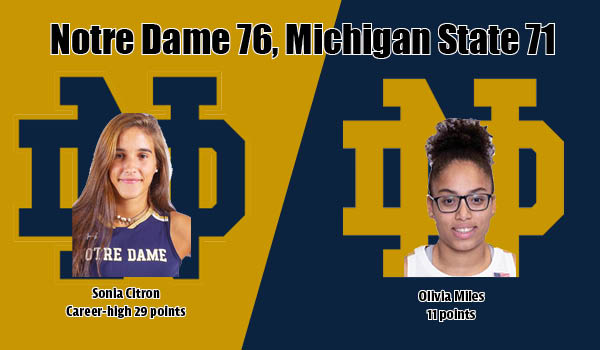 EAST LANSING — The Notre Dame women’s basketball squad did its part in the Big Ten/ACC Challenge, winning a 76-71 battle against the Michigan State Spartans (6-3) inside the Breslin Center Thursday night.

The No. 24-ranked Fighting Irish improved to 7-1 all-time in the Challenge.

Freshman guard Sonia Citron went off for a career-high 29 points, including 21 in the second half. Citron had 13 of the team’s 21 fourth-quarter points. The New York native shot 9-of-12 from the field, 3-of-4 from three, and 8-for-8 from the free-throw line. Citron also recorded five rebounds and three assists.

Notre Dame also got strong efforts from Olivia Miles and Nat Marshall, who notched 11 and eight points respectively. Miles even flirted with a triple-double with 11 boards and eight assists, earning her third double-double nonetheless. Dara Mabrey also finished in double figures with 10 points.

The Irish also improve to 24-3 against Big Ten opposition in their last 27 matches (since the start of the 2009-10 season). They also jump to 12-9 all-time against the Spartans.

It took a few minutes for the Irish to get settled in, starting 2-for-9 from the field with four turnovers, falling into a 12-6 hole. Notre Dame (7-1) then began to click, firing off a 9-0 run, only to be countered by a Spartans 8-0 run. Citron and Mabrey connected from deep in the final 44 seconds to cut the deficit to 23-21 after the opening quarter.

The Notre Dame offense recorded another successful spurt midway through the second, firing off a 9-0 scoring spree in a 1:23 span to go up 34-27. Nat Marshall ignited the fire with four points in the run and six total in the period on 3-for-6 shooting.

Yet the turnover bug struck again, as the Irish coughed up three more over the final 3:24, resulting in zero points in that span as well; thus, Michigan State cut the lead to 36-34 at the half.

The Irish shot 47 percent to MSU’s 33 percent but coughed up 11 turnovers at the midway point. It was young wave of Irish who led at the break: Citron (8 points), Miles (7 points) and Marshall (6 points).

Notre Dame started the second half strong with a 9-1 scoring run, holding Michigan State to without a field goal until the 6:12 mark. Still the Spartans rallied, cutting it to a one-possession game (49-47) with 3:21 left in the period.

Citron stepped up in a big way, scoring eight of the team’s final 10 points in the quarter to give the Irish a 55-50 edge heading to the fourth. Entering the final period, Citron was the lone Irish in double figures, already with a career-high 16 points.

Citron hit a clutch three-pointer with 2:27 left, but was countered by a Michigan State trey just a minute later. Up five, Citron then converted from the free-throw line with 1:08 left, pushing the lead back to 72-65. Citron closed her 13-point fourth quarter with two more free throws with 10 seconds left to ice it.

The Irish remain on the road for a rivalry matchup in Storrs, Connecticut. Tip against No. 2 Connecticut is scheduled for noon Sunday, airing live on FS1.