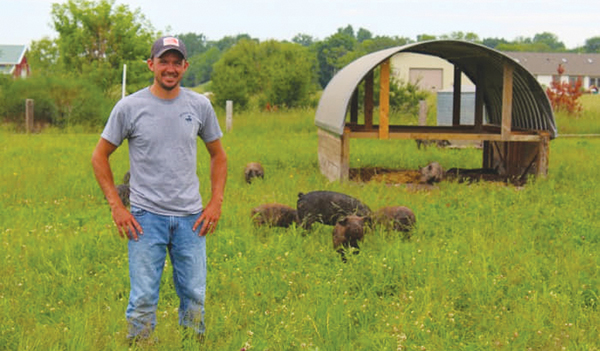 CASSOPOLIS — One area organization is recognizing Cass County residents and programs for their efforts toward conservation.

The Cass County Conservation District announced its 2021 annual awards recipients this week. Each year, the district recognizes people and organizations that show an “extraordinary love of conservation through their actions.”

“We greatly appreciate all they do and applaud their continued success,” said Administrator Korie Blyveis.

The district will present this year’s awards at its annual meeting and election being hosted from 3 to 6:30 p.m. Dec. 7 at the Cass County Council on Aging, 60525 Decatur Road, Cassopolis.

Thomas Bennett left the Marine Corps in 2010 to pursue his goals of raising chickens, turkeys and heritage-breed pigs. He purchased land in Edwardsburg and started his journey as a first-generation farmer. Wanting to expand beyond selling in markets, Bennett launched his online shop in 2019. The success that followed made it possible for him to become a full-time farmer.

With the help of his wife, Elizabeth, and their six children, the farm has continued to expand its clientele annually. They have managed to double production for the past three years and still find it challenging to keep up with demand. On 20 acres, Bennett has been able to produce 5000 broiler chickens, 150 turkeys, and 300 hogs just in 2021. Bennett hopes to double his turkey production in 2022, to meet the demands of his clientele. To keep his impact on the land to a minimum, he supplements their feed with non-GMO grains and rotates their grazing area.

The family delivers products to a wide area, including Chicago, Grand Rapids, Fort Wayne, and everywhere in between. The farm has been MAEAP verified since 2017 in the farmstead, cropping and livestock systems. This means that they have undergone a risk assessment, and have taken all the necessary steps, to become an environmentally verified farm.

“Bennett Farms is a leader in the online sector in the country,” Blyveis said. “They were featured in the Wall Street Journal this summer in an article titled ‘Old McDonald Has an App.’ Bennett has been a guest speaker at conferences and been featured on podcasts, discussing regenerative agriculture, online agriculture sales, home delivery of farm goods and more.”

With leadership from their board, support from Marcy Hamilton of the Southwest Michigan Planning Commission and a team of volunteers, MEANDRS has long worked to protect and restore the health of the Dowagiac River watershed. Renewed efforts rose this summer as the removal of the Pucker Street Dam made the creation of a 19-mile Dowagiac River Water Trail, from M-51 (north of Dowagiac) to where the Dowagiac meets the St. Joseph River in Niles more realistic.

In 2021, MEANDRS partners worked to obtain funding from the Michigan Gateway Foundation to hire a contractor to cut a paddling pathway through major log jams on a very long-neglected section of the Dowagiac River. Volunteers with the Partnership for MEANDRS also took lead and coordinated workdays to cut a pathway on the upper Dowagiac and continue to do much-needed maintenance (clear fallen trees) as need arises along the trail. Volunteers included: Jay Anglin, Eli Fruk, Zane Scott, Dustan Harley, Adam Marton, Neil Keller and Brian Lorenc.

This new effort was fueled by the following projects: Cass County Parks Department built a new kayak launch at Dodd Park, MDNR and the Pokagon Band partnered to create a new access site at Peavine Street and the city of Niles has reopened the park at Pucker Street and applied for a grant to improve it for kayakers and anglers.

“That’s how successful partnerships work together with the shared goal of stewardship for this important Cass County waterway — the Dowagiac River,” Blyveis said.

Receiving his first telescope at age 8, Robert Parrish developed a deep-seated love of the cosmos from shared stories of his father, Andrew, viewing the night sky from aboard the U.S.S. Coral Sea as he served in the Navy. In honor of his father, Parrish led the quest to have Dr. T.K. Lawless Park declared as the second International Dark Sky Park in the state of Michigan and a Michigan Dark Sky Preserve.

Serving on the Cass County Parks and Recreation Board and in his Dark Sky quest, his speaking engagements have educated numerous groups and individuals on the adverse effects that artificial lighting has on the environment, safety, energy consumption and health.

Parrish is a delegate to the International Dark Sky Association and is mentoring two other entities in Michigan to be able to obtain Dark Sky certification, Beaver Island and the Livingston County Parks Department.  He is working with Porter Township Planning Commission in Cass County to design and adopt a lighting ordinance.

“On dark sky nights at Dr. Lawless International Dark Sky Park, you can always find Robert Parrish in the field talking with any, and all park visitors, answering questions and helping them learn about the wonders of the universe. He is doing what he loves and sharing his night sky vision with his dad,” Blyveis said.