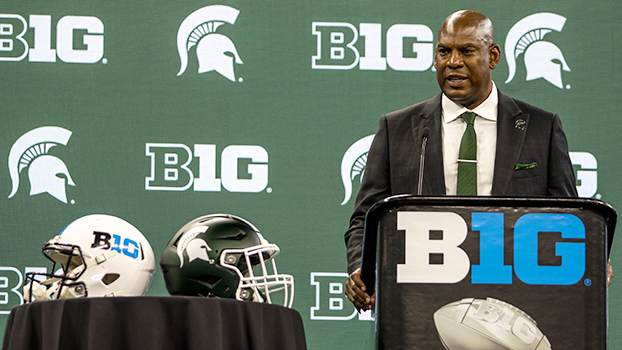 Michigan State Head Coach Mel Tucker has been named the Big Ten Coach of the Year by both the coaches and media. (Leader photo/AMELIO RODRIGUEZ)

EAST LANSING — After leading Michigan State University to a school-record eight-game turnaround, Spartan head coach Mel Tucker has been named the Big Ten Coach of the Year by both the coaches and media, the conference announced on Tuesday afternoon.

In just his second year in East Lansing, Tucker became the earliest Spartan coach to record 10 victories in a season.

Tucker is the sixth Spartan head coach to be named Big Ten Coach of the Year and just the second to win the award from both the coaches and media. The first was Mark Dantonio in 2013.

Tucker has led MSU to a 10-2 record and a No. 11 ranking in The Associated Press Poll and No. 13 ranking in the USA TODAY/AFCA Coaches Poll. The Spartans have been ranked in the Top 25 of the national polls for 11 consecutive weeks, with six of those weeks in the Top 10. MSU has also been ranked every week in the College Football Playoff Top 25 this season.
Named to watch lists for National Coach of the Year by the Dodd Trophy and the Paul “Bear” Bryant Award, Tucker garnered national coach of the week accolades by the Dodd Trophy and The Athletic following Michigan State’s 37-33 victory over No. 6 Michigan on Oct. 30, as he became the first Spartan coach to win his first two games against the Wolverines (27-24 victory at No. 13 Michigan on Oct. 31, 2020).

Going from two wins in 2020 to 10 wins in 2021, MSU has already completed the biggest turnaround in school history (previous: seven-game improvement from 2016 to 2017) heading into its bowl game.

In addition, the All-Big Ten defense and special team selections were also announced on Tuesday, with nine Spartans earning honors.