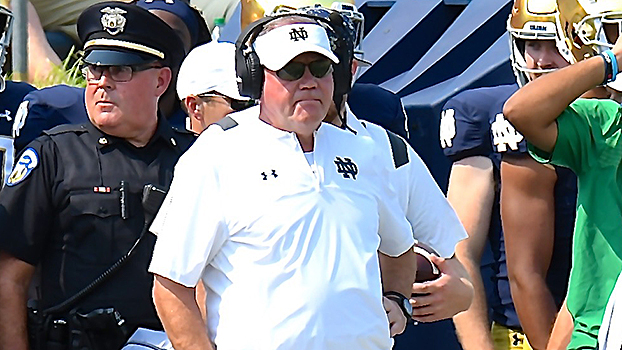 After leading the Fighting Irish to an 11-1 season, Brian Kelly has left Notre Dame to become the new coach at LSU. (Leader photo/KELLY SWEENEY)

NOTRE DAME, Ind. — What started as a buzz on social media Monday afternoon turned into a full-blown roar as darkness fell across Michiana and word got out that Notre Dame Head Coach Brian Kelly was leaving to become the new coach at Louisiana State University.

The story was originally speculation, much of which was coming via Twitter. By nightfall, speculation was turning into news reports that the all-time leader in victories for the Fighting Irish was heading south despite Notre Dame still being in the running for a spot in the College Football Playoffs.

Kelly, who was not in South Bend at the time, finally informed his team via Twitter that he would no longer be their head coach. He apologized to them that the news came through social media and news outlets instead of face-to-face from him.

Kelly, who flew in the town Monday night, hosted a meeting with the team at 7 a.m. Tuesday. According to reports, the meeting lasted just 10 minutes.

At 10 a.m. Tuesday, Notre Dame Athletic Director Jack Swarbrick met with the media, both at Notre Dame Stadium and via Zoom, to discuss where the university goes from here and prepare for the upcoming bowl season, recruiting and when the search for a new coach would begin.

“Twelve years ago this week, I was involved in a search for a new coach at the University of Notre Dame to lead its football program, and 12 years later, I find myself in that role again,” he said. “The circumstances could not be more different. Then I was in the process of trying to find someone to fix a very broken program, and in a circumstance where frankly, a lot of people didn’t think this was a place they wanted to be because they didn’t think Notre Dame was committed or able to produce championship football teams.

“I couldn’t be more pleased with the difference I see today as I embark on another search. In my 14 years, this program has never been in better shape, we have never been in a better position to take the next step in building this program into a consistent contender for national championships, and I am excited with the opportunity to attract the next leader to do that.”

On Wednesday, Kelly is scheduled to be announced as the new LSU head coach by the Tigers’ Athletic Director Scott Woodward. Reports have begun to leak out of Baton Rouge, Louisiana that Kelly has agreed to a 10-year contract worth $9.5 million per year. With incentives, Kelly would earn as much as $100 million over the length of the contract.

Kelly replaces Ed Orgeron, who was fired in October.

Kelly is 113-40 at Notre Dame, including 11-1 this season. The Fighting Irish have had five consecutive seasons of at least 10 wins. Kelly has coached Notre Dame to seven 10-win seasons in his 12 years at the school.

Swarbrick said that an interim tag would not immediately be bestowed on one of the assistants.

“We haven’t made a decision on an interim yet, and frankly, we may approach it a little differently,” he said. “This staff is so well structured and the responsibilities are so well understood, I feel less of a need to have a designated interim. But as the search progresses, if we feel the need to put somebody in that position, they would not be a candidate for the job.”

Swarbrick, who will lead the search for Kelly’s replacement, said there is no timetable for naming a new coach. The important part is getting the right person.

“First and foremost is getting the right leader, I recognize the external factors if you will, the recruiting calendar, the transfer portals, but none of that is a reason not to make sure we run a process that gets the very best person to lead this program forward, so that will be our focus,” he said.

Over the next days or weeks, Notre Dame fans can expect to hear plenty of potential candidates for the position. Among the ones already being thrown around less than 24 hours after it became official that Kelly was gone, Notre Dame Assistant Coach Marcus Freeman, University of Cincinnati Coach Luke Fickell and Iowa State Head Coach Matt Campbell.

When asked when he learned of Kelly’s decision and if he was surprised, Swarbrick said he was not.

“It was sometime last night, and I can’t give you the exact time,” he said. “I was not surprised. There had been in the weeks leading up that gave me a pretty strong sense that there might be other things that were attracting Brian, and then, of course, social media got very active during the day yesterday.”

Did Kelly give Swarbrick an indication what Notre Dame needed to give him to stay or that he was speaking with other schools?

“He did not discuss with me the conversations he had with other universities,” he said. “We always are talking about the program’s needs and how to improve it, and there was not anything identified at any time that was something we could not accommodate or meet. We just didn’t have those conversations.”

Swarbrick said that while he spoke with several assistant coaches via text and spoke to more of them Tuesday, the decision was made to leave them out on the recruiting trail.