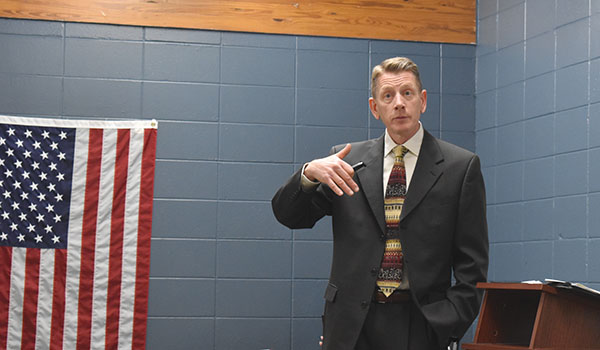 CASSOPOLIS — Though board of education members said the decision was a difficult one, they have chosen the next leader of Cassopolis Public Schools.

After two rounds of interviews, John Ritzler, retired executive director of research and evaluation at South Bend Community School Corporation, has been selected to be the next Cassopolis superintendent pending contract negotiations. Ritzler will replace former superintendent Angela Piazza, who resigned Aug. 2. Curriculum and Grants Coordinator Brooke Brawley has been serving as interim superintendent ever since.

Ritzler was chosen from a pool of four initial candidates who were interviewed last week. Both Ritzler and Frank Serge, retired principal at Elkhart Central High School, returned for second-round interviews Monday. Board members said though they would have been happy with either candidate, Ritzler edged out the competition to earn a vote of unanimous approval from the board.

“Both candidates bring different knowledge and aspects to the job. I honestly didn’t think it would be this difficult to choose one over the other,” said Aaron Steensma, trustee. “[Ritzler] has a lot of knowledge in central office, and he has worked with six different superintendents in a tough district and has been able to work with all of them.”

“My thoughts are that they are both good candidates,” said Board President Deb Deubner. “The two things that I appreciate about Dr. Ritzler that I didn’t hear as much from Mr. Serge is listening — he repeated listening. The other thing is when we talked about having a plan going forward, he mentioned the importance of [community and staff] buy-in.”

Ritzler, who grew up in Battle Creek, Michigan, has taught in both Michigan and Indiana and served as a volleyball and cross country coach. He moved to South Bend schools in 1999, where he served in a central office position and sat on the superintendent’s leadership team. He retired in July 2020. He is coming out of retirement to take the Cassopolis superintendent position, where he said he plans to end his career after serving as long as he is physically able.

During Monday’s meeting, Ritzler outlined a plan for the 90 days of his superintendency. In the plan, he emphasized the importance of communication with students, staff, parents and the community. During his first 90 days, Ritzler said he plans to meet with the community and district stakeholders regarding their vision for the schools.

Ritzler said he would take that input into consideration in nearly every decision he would need to make as superintendent, from curriculum to how to best prepare students for success post high school.

During his interview, Ritzler said the Cassopolis position excites him and that he would always put students first — not himself or his career.

“This is not about John Ritzler. This is about Cassopolis Public Schools,” he said. “Students are often referred to as ‘the community of tomorrow,’ and while that’s true, they are also the community of today. They are contributors to the community today. If we take seriously our job to equip, strengthen, professionally develop and empower the staff who are going to work with those students, then that’s not only going to achieve your vision, it’s going to make sure that you are impacting the community of the future and the community right here and right now. That, I would say, is my last critical statement.”