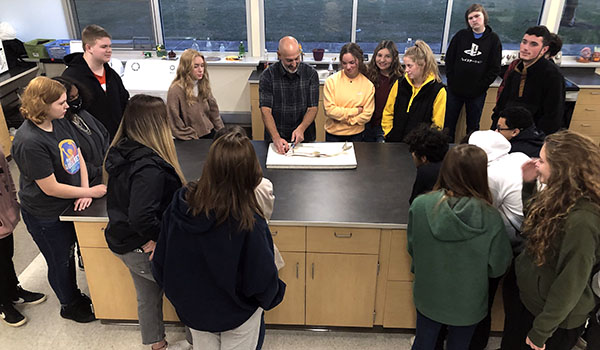 While Dowagiac culinary teacher Andy Kruger does not plan to teach his class to fish until spring, he caught a few Lake Michigan Whitefish over the holiday weekend and taught his culinary arts classes to filet and cook the fish on Monday.

“It’s neat for these young people to know what’s outside,” said Kruger, who enjoys fishing in his free time. “It was neat for them to see that you can catch your own. … I think it’s important just to know where your food comes from.”

Most of the year in Michigan, catching whitefish is only done by commercial fisheries due to the 200-foot depth the fish typically inhabits. However, around spawning time in late Fall, the average angler can catch them along most Lake Michigan piers, Kruger said.

“You can usually catch them around Thanksgiving,” he said. “Apparently, this year they came a couple of weeks early, so the run was almost over by the time I got there.”

Kruger braved the wind and snow for several hours on Saturday to catch two 24-inch whitefish on the Muskegon Pier, one for each class. He said there can be up to 200 people on the pier at one time during the spawning season.

“I had one, and it was like ‘crap, I’ve got to get another one for my other culinary class,’” he said. “So, I’m leaning on the pier hunched over, my back is in the wind. It was snowing. Then after about an hour and a half of that, I got one and was like ‘yes.’”

Kruger pre-cleaned the guts at home so his class would be less disgusted by the process, then demonstrated to the class how to filet the fish in class.

“There were a few reactions looking at the fish, but nobody ran the other way,” Kruger said. “It was a pretty professional operation.”

Students prepared the fish with a marinade and baked it. Each fish was enough for six groups to marinade and cook the fish. The marinade was made from garlic, honey, soy sauce, brown sugar, mustard, olive oil, butter and red pepper flakes.

The class then got to taste their creations.

“Everybody pretty much tried it,” Kruger said. “They took a chance, even the non-fish eaters had a piece, so that was pretty neat. … Not one kid said it was bad.”

Previously in his class, Kruger taught his students how to bread a bluegill, but this was the first year he brought whitefish into the class and plans on doing it every year in the future. In the spring Kruger’s class will participate in a fishing contest at Mill Pond.

“I think it’s very important for the kids to get outdoors and see what’s going on and not be on their cell phones,” said Kruger, taking the old fishing adage to heart. “There’s a world out there, and if there’s no electricity and the grid goes down, I tell them this is how it’s going to have to be. They’ll have to fend for themselves, and know how to clean, know how to catch, know how to build a fire to cook with.” 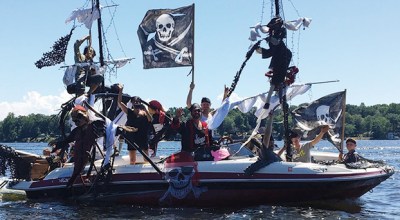