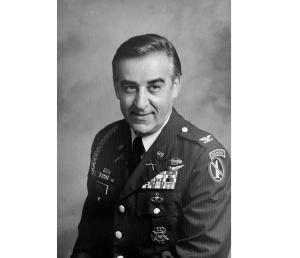 Colonel Ventrella was born Aug. 27, 1929, in Niles, Michigan, the son of Rocco Francis, Sr. and Grace Trankina Ventrella. He graduated from the US Military Academy, West Point, in 1953 and was commissioned in the Infantry. Colonel Ventrella was a Ranger and Master Parachutist, and served in Austria, Italy, Japan, Korea, and Vietnam. During his military career he commanded units in the 82nd and 101st Airborne Divisions, and his assignments included being: The Associate Director of Admissions & Registrar at West Point, Chief of the Middle East Region Office of The Joint Chiefs of Staff, Army Staff Officer to the Commander of the Seventh Fleet, Inspector General of the Military District of Washington, D.C., and an Officer at the Department of State.

A memorial service will be held at West Point, New York, with inurnment in the West Point cemetery.

Family and friends are welcome to submit online condolences at mundenfuneralhome.net