Notre Dame rebounds to knock off No. 16 Oregon State 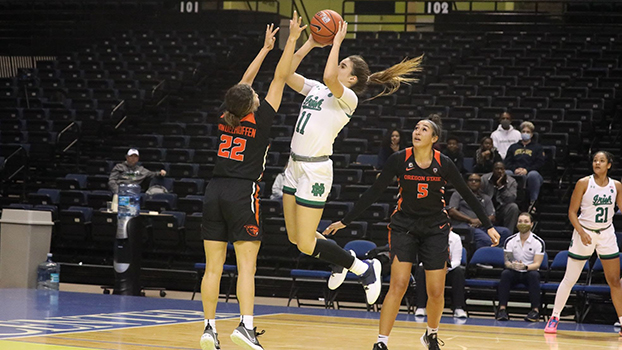 Notre Dame rebounded from its first loss to defeat defeating No. 16 Oregon State 64-62. (Photo courtesy the University of Notre Dame)

DAYTONA BEACH, Fla. — The Notre Dame women’s basketball team handled the adversity of its first loss of the season with the first AP ranked victory in the Ivey era, defeating No. 16 Oregon State 64-62.

The Fighting Irish (6-1) boasted a 20-point lead heading into the fourth before adding a little drama, but ultimately their defense stood tall in the final seconds, holding on for the two-point victory.

Sophomore Maddy Westbeld continued to show out, notching her seventh consecutive game in double figures (one shy of tying her career-high) with 11 points. Maya Dodson joined her in double figures with her fourth of the season, supplying a team-high 14 points. Together they combined for 15 rebounds.

Notre Dame came out firing, jumping out to an 8-0 start in the first 90 seconds. Oregon State (3-2) tried rallying late in the period, cutting it to one possession at 14-12, but the Irish defense kept the Beavers off the board for the final three minutes, extending the lead to 19-12. Dodson led in the opening frame, scoring eight points on 4-of-6 shooting.

Westbeld scored six of the team’s first eight points in the second quarter, while the defense stood its ground. In fact, the Irish held the Beavers to just two field goals in the quarter, spanning a near nine-minute drought (9:40-0:59). Abby Prohaska closed the half with a big and-one to bring the score to 30-18 Notre Dame at the midway point.

Oregon State would pull within single digits at 6:58 in the third (37-28), but from that point, the Irish outscored the Beavers 19-8 for the remainder of the quarter. Eight different Irish players scored in the period, led by Citron’s six points. All-in-all, Notre Dame took a 56-36 lead into the final frame.

The Beavers made it interesting in the fourth, outscoring the Irish 24-8 to cut it to 64-60 with one minute remaining in the game. Notre Dame missed a pair of jumpers in the paint, then fouled Oregon State on the following possession, as they converted a pair of free throws to make it 64-62.

With 18.4 on the clock, Notre Dame had an opportunity to stretch it to two possessions but missed both its free throws. Down on the other end though, the defense stood tall but the ref called a foul with 0.7 seconds on the clock. Oregon State returned the favor by missing both of their free throws as time expired for the Irish victory.

The Irish remain on the road, but return to the Midwest, traveling to East Lansing Thursday, to try to topple Michigan State (5-2) in the ACC/B1G Challenge. That matchup will tip at 6 p.m. on Big Ten Network.