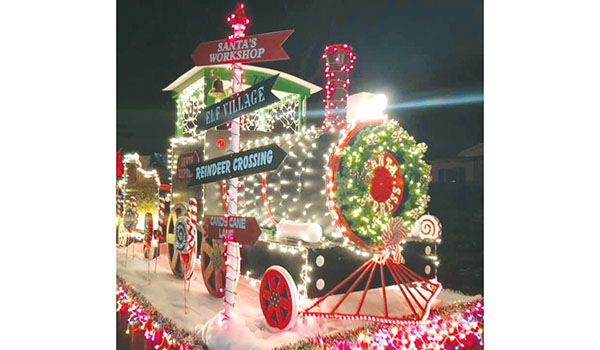 DOWAGIAC –  Much like the setting of a Dickens’ novel, one of southwestern Michigan’s largest Christmas parades is sure to transform Dowagiac, with its turn-of-the-century storefronts, into a storybook-like setting, as this community’s holiday procession takes to the streets at 7 p.m. this Friday, Dec. 3.

The Dowagiac Candle-light Christmas Parade is presented by the Greater Dowagiac Chamber of Commerce and Ascension Borgess-Lee Hospital.

Holiday festivities Friday kick-off at 6:30 p.m. downtown, where three choirs will perform until the parade steps off at 7 p.m. Dowagiac Union High School Choir will perform in front of City Hall at Main and Front streets. Southwestern Michigan College Select Voices will perform at Front and Commercial streets, with the United Methodist Choir performing at Front and Beeson streets.

Providing background music for the grand procession will be Lincoln Clark, director of the Performing Arts Center at Dowagiac Middle School.

According to Vickie Phillipson, chamber of commerce program director, in order to maintain a safe environment for the public and for parade participants, the police will close Front Street to through traffic and on-site parking on parade day beginning at 4 p.m.

“In doing so, there will be no on-street parking for the Dec. 3 parade, which will allow adequate room for families to safely watch the event, without the fear of parade units coming too close to the crowd,” Phillipson said.

Known as one of southwestern Michigan’s largest lighted parades, Dowagiac’s holiday procession is part of this community’s four-part Christmas Celebration, which also included the Nov. 12 & 13 Open House Weekend, Small Business Saturday and the upcoming Breakfast with Santa on Saturday, Dec. 11, at the Elks Lodge.