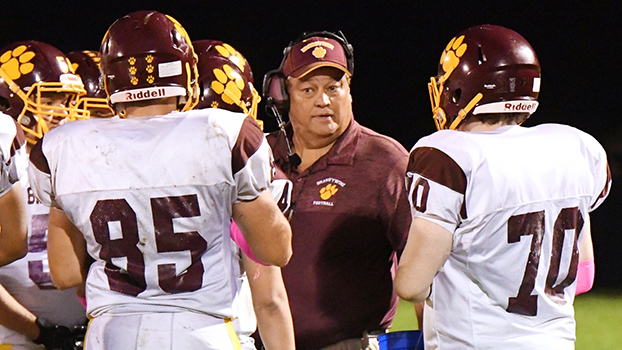 Brandywine Coach Mike Nate announced his retirement after 13 seasons at the helm of the Bobcats’ program Monday. (Leader photo/KELLY SWEENEY)

NILES — After 40 years of coaching, the last 13 of which came at Brandywine High School, Mike Nate announced his retirement Monday morning.

The Dowagiac graduate began his career as a volunteer assistant coach at Kalamazoo Christian in 1979. Russ Barnes added Nate to his Decatur staff in 1982, where he coached until Denny Dock hired Nate at Dowagiac. There, Nate coached four years under Dock before remaining on the staff when Dock was replaced by Bernard Thomas. He coached with Thomas for 11 years, which included the 1990 Class BB state championship.

Nate was an assistant coach at Niles under Art Zache and Dave Janicki before getting his first head coaching position at Bridgman, where he coached for four years before moving on to South Bend Riley for two seasons. He took over the Brandywine program in 2009.

At Brandywine, Nate’s Bobcats were 73-49, including a 9-0 regular season in 2019. Brandywine made the playoffs seven out of Nate’s 13 seasons. The Bobcats won the school’s first-ever playoff game in 2020.

Nate said that it is now time to concentrate on the family business.

“Every year got a little harder,” he said. “I am not 19 anymore like when I started coaching. Forty years is a long time. I wanted to have some free time to enjoy other things. I need to focus on the family business for the future.”

When the time came to finally give up coaching, Nate said he just knew.

“I always said that when it started to feel like a job, it was time to retire,” he said.

Dowagiac, because it was his alma mater, and Brandywine will always hold special places in his memory of all of his coaching stops.

“At Riley and Bridgman, I never really got the program where I wanted it,” Nate said. “We made strides at Bridgman. At Riley, we only won five games, but they were some big games. I will never forget beating 6-1 Washington, and we were just 1-6, but it prepared me because I was coaching at that high level against some really good teams.”

Nate said that while he always wanted to take the Bobcats farther, he and his staff can be proud of what they accomplished.

“We were solid,” he said. “We won a playoff game. We were 73-49 in my career. We did have a 9-0 team for the second time in school history. We beat Buchanan six times, which is what they wanted when they hired me.”

Nate thanked all of the assistant coaches who helped him throughout the year and the players who helped make his teams successful.

“We set a lot of school records at Brandywine,” he said. “We pretty much rewrote the record books. I had the leading rusher in Marty Ward, and Jordan Abrams broke that. Shane Brown has most of the receiving records, and the ones he doesn’t have, Austin Knapp does. Andrew Duckett has pretty much all of the passing records.”

First-year Brandywine Athletic Director David Sidenbender said that one has to consider Nate as one of the Bobcats’ best football coaches.

“He has done a great job,” he said. “He is right up there with [Jim] Myers with all he has accomplished.”

Sidenbender said that the district would put together a committee and begin the search as soon as possible for Nate’s replacement.

Sidenbender also thinks it is important to find someone who can continue what Nate built.

“I don’t think our cupboard is bare,” he said. “We have a few returners. Whoever comes in has a good foundation there.”