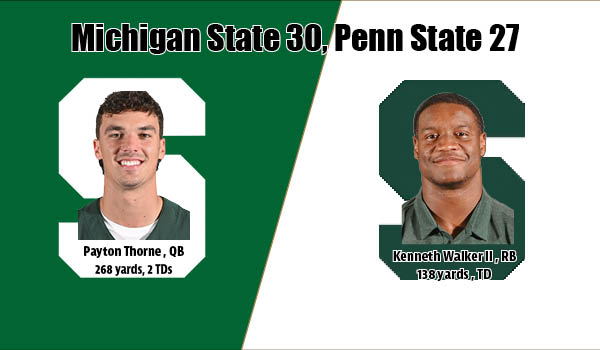 EAST LANSING — The No. 12-ranked Michigan State Spartans took advantage of a late turnover by Penn State to score a touchdown and recovered an onside kick with less than a minute left as the Spartans beat the Nittany Lions, 30-27, on Senior Day Saturday.

The win secured MSU’s 10th win of the season, the first time with 10 wins since 2017 and the ninth in school history.

“I just can’t say enough about this group,” said MSU Head Coach Mel Tucker. “This group of guys, this group of coaches is a really special, special group, and it’s an honor and a privilege to work with them, and they’re resilient. They fight like heck out there, and you can tell they play for each other.”

Kenneth Walker III recorded his eighth 100-yard rushing game of the season with 138 yards on 30 carries, scoring one touchdown. Payton Thorne was 19-of-30 passing for 268 yards and two touchdowns, including a 15-yard scoring pass to Jayden Reed with 5:10 to play that gave the Spartans a 30-20 lead.  Reed caught 10 passes for 89 yards.

Defensively, Cal Haladay led the Spartans (10-2, 7-2 Big Ten) with 11 tackles, including 2.5 for loss, while Darius Snow and Drew Beesley had seven tackles apiece. Beesley also had 1.5 sacks and a pass break-up on his Senior Day.

After forcing a punt on PSU’s first possession, the Spartans scored again on a 9-play, 99-yard drive, this time on a 9-yard TD pass from Thorne to Tre Mosley. Walker had a 35-yard run from the PSU 1-yard line that ignited the scoring drive.

Penn State (7-5, 4-5 Big Ten) got on the board on its second possession as Sean Clifford found Jahan Dotson for a 27-yard touchdown pass, cutting the Spartan lead to 14-7 with 3:37 left in the first.

The Nittany Lions tied the game at 14 at the 12:11 mark in the second quarter on Dotson’s second touchdown grab from 30 yards out.

Sixth-year senior Matt Coghlin, appearing in his 56th career game, kicked a 22-yard field goal with 5:59 left in the first half as MSU reclaimed the lead, 17-14.

The Spartans maintained their three-point lead into halftime as Penn State kicker Jordan Stout missed a 27-yard field goal just before the break.

Penn State took its first lead early in the third quarter on Daequan Hardy’s 17-yard interception return for a touchdown at the 11:07 mark, but Stout did miss the extra point to make it 20-17 in favor of the Nittany Lions.

The Spartans responded to the turnover by taking 8:53 off the clock on a 15-play, 75-yard drive that was capped by a 1-yard Thorne TD run to regain the lead at 23-20 with 2:14 left in the third. MSU did miss the extra point to keep it a three-point game.

On a key fourth-and-1 from the MSU 16 with 12:43 left in the game, Noah Harvey stopped Keyvone Lee for no gain as the Nittany Lions turned the ball over on downs.

The Spartans forced their first turnover of the day as Beesley pounced on a fumble that was caused by Haladay and recovered at the PSU 48-yard line. On the ensuing possession, MSU moved to the 15-yard line after a 25-yard pass from Thorne to Connor Heyward. The Spartans were pushed back to the 20-yard line and faced a fourth-and-15 when Thorne found Reed in the right side of the end zone for a touchdown to put the Spartans on top, 30-20, with 5:10 left.

Michigan State forced another fumble on the ensuing kickoff, but turned it over on downs after four plays at the 22-yard line. Penn State converted a fourth-and-24 and went on to score a touchdown on a 15-yard pass from Sean Clifford to Parker Washington with 43 seconds left.

Reed scooped up the onside kick to seal the 30-27 win for the Spartans.

Michigan State will find out its bowl destination on Sunday, Dec. 5.