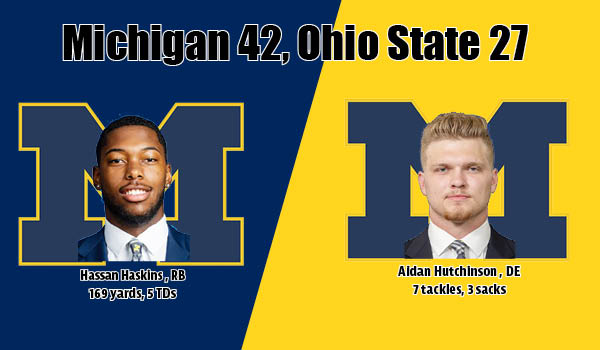 ANN ARBOR — Hassan Haskins rushed for 169 yards and tied a school record with five touchdowns as the No. 6-ranked University of Michigan football team used a dominant ground game to defeat No. 2 Ohio State 42-27 on Saturday (Nov. 27) at Michigan Stadium.

The win gives the Wolverines (11-1, 8-1 Big Ten) a share of the Big Ten Conference East Division title and their first berth in the Big Ten Championship Game.

Fans covered the field in a jubilant postgame celebration after the Wolverines rushed for 297 yards and six touchdowns to collect their first victory over the Buckeyes since 2011, snapping an eight-game losing streak against their biggest rival and improving to 59-52-6 in the series.

Haskins carried the ball 28 times in a signature performance, including all five times during the final touchdown drive that sealed the victory. Quarterback Cade McNamara was 13 of 19 passing for 159 yards but only had to throw the ball three times in the second half as the Wolverines ground out touchdowns on all four of their drives after halftime.

With light snow starting to fall at the start of the game, Michigan used its running attack to move quickly down the field on its opening drive, going 75 yards in 10 plays culminating in a 14-yard reverse from slot receiver A.J. Henning. Placekicker Jake Moody added the point-after to give Michigan the early 7-0 lead at 10:12. Haskins, who had runs of 16 and 17 yards while accounting for 38 yards on four carries, converted three third downs during the drive.

After forcing a three-and-out on Ohio State’s first drive, the Wolverines had a golden opportunity to add to their lead. Henning’s 16-yard punt return set up U-M at the OSU 39-yard line, and McNamara connected with receiver Roman Wilson for 24 yards on first down to move the ball to the 15. However, on the next play, McNamara’s throw into heavy coverage down the middle of the field was picked off near the goal line by Bryson Shaw and returned 20 yards.

The Buckeyes converted that turnover into points, using their own ground game to move into the red zone, where they faced third-and-goal from the 3. The drive stalled, however, as a false-start penalty followed by Hutchinson’s sack of C.J. Stroud forced the Buckeyes to settle for a 31-yard field goal from Noah Ruggles that got OSU on the scoreboard with 3:36 left in the opening quarter. TreVeyon Henderson’s 28-yard run midway through the 12-play drive accounted for half of Ohio State’s 56 rushing yards on the 64-yard drive.

Michigan picked up a couple first downs on its next drive before a Brad Robbins punt was fair-caught at the OSU 3. However, Michigan was called for kick-catching interference, which took the Buckeyes out to the 18. Keyed by Henderson’s 25-yard run, Ohio State moved the ball to midfield before defensive end Mike Morris batted down a pass on third down to force a punt. Michigan took over at its own 10 but gained just three yards before punting from its 13-yard line.

OSU took over on its 44 and quickly used the good field position to gain its first lead. Pass plays of 10 and 23 yards sandwiched around a two-yard tackle for loss by linebacker Jaylen Harrell moved the ball to the Michigan 23, and Garrett Wilson made a leaping catch at the left pylon for a 25-yard touchdown play from Stroud. The PAT made the score 10-7 OSU with 9:12 left in the second quarter.

Michigan answered behind key plays by Haskins and receiver Cornelius Johnson, going 82 yards on 13 plays in 5:15 to pull back ahead, 14-10, on Haskins’ one-yard score with 3:51 left before halftime. Johnson’s 11-yard catch from McNamara converted a third-and-3 to start the drive, and the duo later put U-M on the doorstep with a 39-yard pass play down to the OSU 2. Haskins continued to do work, picking up two more first downs, including a two-yard gain on fourth-and-1 from the OSU 43, before ending the drive by leaping into the end zone for the touchdown.

The Buckeyes put together another solid drive starting at their own 25 and had a first down at the U-M 20 before the Wolverines defense stiffened. Ruggles curled in a 30-yard field goal inside the left upright with 0:09 on the clock, and Michigan took a 14-13 edge into halftime.

After linebacker Josh Ross stuffed Henderson for a two-yard loss to start the second half with an OSU three-and-out, Michigan’s ground game again asserted itself, going 81 yards in three plays. Running back Blake Corum rushed for 13 and 55 yards on back-to-back plays to start the drive, and Haskins followed tight end Erick All around the right side for 13 yards into the end zone. Moody tacked on the PAT to give U-M a 21-13 lead with 11:50 left in the third quarter.

Michigan’s offense continued to roll, as the Wolverines hit two big pass plays before Haskins capped off a five-play, 78-yard drive with another score to make it 28-13 with 5:49 left in the third quarter. Backup quarterback J.J. McCarthy found Roman Wilson down the right sideline for 31 yards, and then a flea-flicker from McNamara to receiver Mike Sainristil gained 34 yards to the OSU 7. After McCarthy rushed for six yards, Haskins used another big block from All to go into the end zone around the left side.

Ohio State answered with a persistent touchdown drive that covered 82 yards in 17 plays, capped by Henderson’s one-yard run. Facing third-and-19 from the U-M 47, Stroud kept the drive alive with a 26-yard completion to Jaxon Smith-Njigba, and the Buckeyes pulled back within one score at 28-20 with 14:05 to play.

The Wolverines regained a 15-point lead as their ground game continued to impose its will on the Buckeyes. Aided by two OSU penalties, Michigan ran the ball eight times during its nine-play, 66-yard drive that ended with Haskins going over from two yards out to make it 35-20 with 9:14 remaining. Corum added a nice nine-yard run that got the ball to the OSU 5-yard line.

OSU again cut its deficit to eight points, as Stroud completed seven of 10 passes for 83 yards during a 13-play, 75-yard drive that consumed 4:29. On fourth-and-5 from the U-M 5, Stroud lofted the ball to the left over Hutchinson to Henderson, who went in untouched for a 10-yard TD reception that made the score 35-27 with 4:45 to play.

Looking to run out the clock and secure the rivalry win, Michigan again turned to Haskins, who powered his way to runs of 15, six and 11 yards before hurdling a Buckeye defender during a 27-yard burst that set up his unabated four-yard touchdown run that gave U-M a 42-27 edge with 2:17 to play and sealed the victory. With his fifth rushing touchdown of the game, Haskins tied Ron Johnson’s Michigan school record set in 1968.

Michigan will be bidding for its conference-leading 43rd league title when it plays Iowa in the Big Ten Championship Game Saturday, at Lucas Oil Stadium in Indianapolis, Ind. Kickoff is scheduled for 8 p.m. on Fox.