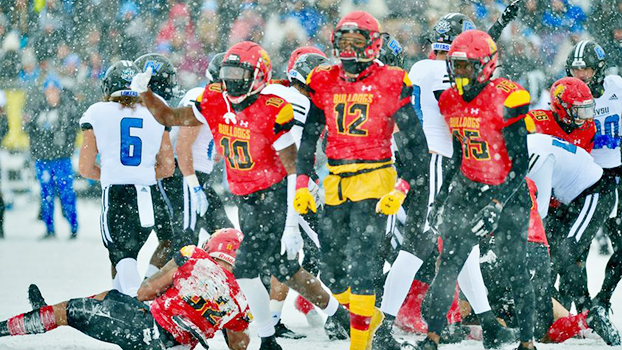 On a snowy day, the Bulldogs bolted in front early and rolled up 532 yards of total offense while limiting the Lakers to only 66 rushing yards in addition to forcing five turnovers to garner the victory.

The win was the Bulldogs’ second this year over GVSU and the 10th in the last 12 matchups against the Lakers, including the sixth consecutive series’ win.

With the victory, the Bulldogs will now advance to the Super Region Three Championship game to face Northwest Missouri State Saturday.

Ferris State struck on its opening drive of the game as senior quarterback Jared Bernhardt raced 65 yards to the end zone less than two minutes into the contest. He finished with 117 rushing yards and two touchdowns while throwing for 166 yards and two scores before leaving the game due to injury in the second quarter.

After the FSU score, the Lakers answered as Cade Peterson directed a four-play, 79-yard drive capped with a six-yard touchdown throw to Bryce Young-Walls, knotting the game up at a score apiece less than four minutes into the tilt.

However, from there the Bulldogs dominated play, building a 33-7 halftime lead. Bernhardt scored on a one-yard run to push the margin to 14-7 and then found slot receiver Marcus Taylor on a 76-yard scoring throw before hooking up with tight end Mason Pline on a 26-yard jump pass for a touchdown.

The Bulldogs added a pair of late first half field goals from junior Sy Barnett in the final 3:07 of the half with the first from 27 yards and the second from 42 yards away.

In the third quarter, the Bulldogs pushed the margin to 40-7 with sophomore signal caller Mylik Mitchell finding pay dirt on a 13-yard scoring run midway thru the period. Later, after GVSU finally got back on the board on Young-Walls’ three-yard touchdown run, the Bulldogs built the lead back up to 47-13 when Mitchell found Taylor from 13-yards out to finish a five-play, 57-yard jaunt.

Ferris’ Evan Cummins became the third Bulldog quarterback to find the end zone in the fourth quarter, accounting for FSU’s final score on a three-yard carry with 12:57 to play. The Lakers scored the final points with 6:17 remaining when Peterson found Hunter Rison for a 15-yard score.

Overall, Ferris State ran for 299 yards and threw for 233 yards while not turning the ball over in the snowy conditions.

Defensively, the Bulldogs held GVSU to only 276 total yards as Peterson went 16-of-35 in the air for 210 yards and two scores, but was intercepted four times.

On the receiving end, Xavier Wade caught six passes for 91 yards for FSU with Taylor making four grabs for 115 yards and two scores.

The Bulldogs held GVSU to an 0-of-10 showing on third down and Ferris State controlled the time of possession with 38 minutes compared to only 22 minutes for the Lakers.

FSU improved to 11-0 overall with the win and it now marks the seventh consecutive year in which the Bulldogs have won 11 games or more in a campaign.

Stay tuned to FerrisStateBulldogs.com for additional information on FSU’s next matchup with Northwest Missouri State as it becomes available.