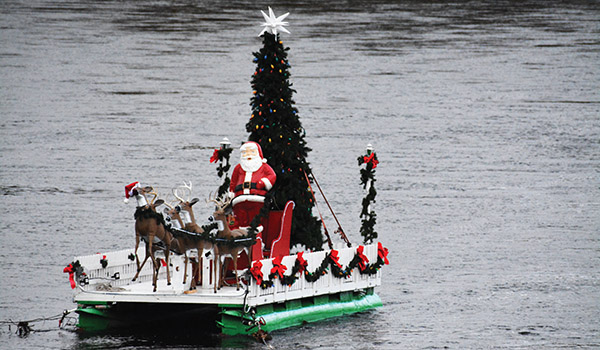 NILES — It was a day Mike Peters will not soon forget.

Peters, the owner of East Main Gardens, can remember the day his father, Roy, first installed Santa in the St. Joseph River between the W. Main Street and Grant Street bridge in 1962, hoping to give children in the children’s wing of Lakeland Hospital a boost of Christmas cheer.

“I was six years old,” Peters recalled. “I remember drinking hot chocolate, eating donuts, running around the river and passing my dad tools whenever he needed them.”

In the years since, “Niles’ River Santa” — a raft featuring Santa, his reindeer and a Christmas tree — has become one of the most beloved holiday landmarks in the community, unofficially marking the beginning of the Christmas season.

Like his father before him, Peters and a dedicated group of community members kept the tradition alive and installed Santa for the 59th time on Sunday, Nov. 21.

“All in all, I think my dad and his buddies were looking over us with the weather,” he said. “I think it looks pretty good, people are happy. It just warms you with how many people appreciate the memories it brings them. That’s why we do it.”

Growing up, Peters assisted his father and his father’s friends with installing Santa in the river before taking over coordinating the project in 1989.

“He got to the point where he couldn’t do it anymore,” Peters said. “He asked me and Larry [Pickles] to do it. We condensed it a little bit, but it’s as pretty as it has ever been. I knew the vision he had. For us to keep that vision going for the kids means everything. I can still picture my dad and his buddies working on it. Knowing I have friends like he had means a lot.”

Installing Santa in the river with temperatures routinely near freezing is quite the endeavor each year, but Peters and his volunteers have accumulated stories over the years that make it all worth it.

“One year, I was leaving the parking lot at the boat launch and a van was pulling in,” he said. “The van’s doors opened before the van even stopped, and kids came out. The mom was upset, but they were so excited to see Santa. Another time, an older lady in the hospital saw Santa out the window. One day, I was delivering flowers to the hospital, and she left me a note saying how it meant so much to her. That’s exactly why we do this. The guys who help me share the vision. They feel the Christmas spirit, and I think everybody does.”

“Two years ago, we had an incident on the river where it submarined in the water and wiped everything out,” Peters said. “The community donated funds for a new reindeer, fence and lights.”

Peters appreciates the work “Santa’s Helpers” put into the project every year.

“We have more people helping now than when my dad did it,” he said. “A great group of guys who have kids and grandkids. They get that warm feeling like we all do.”

According to Peters, Santa was installed one week early this year compared to previous years. Typically removed following the conclusion of the Hunter Ice Festival, Peters said that Santa will be removed from the river after New Year’s Day, weather permitting.

“We had issues before where there has been so much ice that we couldn’t take it out until March,” Peters said. “We plan to remove it after the holiday to let the community enjoy it.”

With the community behind them, Peters and his helpers believe Santa will continue to patrol the waters of the St. Joseph river for years to come.

“With that community support like this, how can you go wrong,” he said. “We are thankful to the community, and will do this as long as we can.”