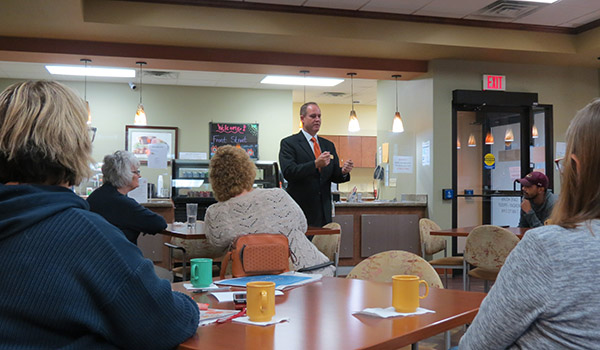 DOWAGIAC — With 30 teachers having left the Dowagiac Union School District since Jan. 1, parents and community members have been concerned the local children are the ones paying the price.

During last week’s Spill the Beans session at the Cass County Council on Aging, 227 S. Front St., district Superintendent Jonathan Whan answered several questions regarding whether these lost teacher positions were filled, who have filled them and any other fallout related to the exodus of teachers.

One resident was concerned that certified teachers were not replacing the teachers who left. According to Whan, the district has filled 28 of the 30 vacated positions and did not need to fill the other two: an art position and a part-time technology position at Dowagiac Middle School.

Whan said the state of Michigan has a certification process that the school has to go through with all of its teachers, and there are seven ‘unique scenarios’ in which the teacher is certified but not through the traditional process through the state.

“So, for example, we have two teachers that have teaching certificates from out of state that are reciprocal,” Whan said. “Those states are reciprocal of Michigan.”

There are three teachers who previously were certified and have completed a different set of requirements to regain their certification, according to Whan.

There are two teachers in the district who completed one of the state’s alternative routes to certification through a program called Teachers of Tomorrow, which requires prospective teachers to demonstrate pedagogical knowledge, pass required state exams, build a solid teaching foundation through online studies, and lead a classroom for three academic years before reaching certification.

“The state recognizes them as teachers,” Whan said, adding the school fills out Registry of Educational Personnel forms to the Michigan Department of Education for audit.

Despite the positions being filled with certified teachers, some community members still had concerns. One attendee said she felt like many of the teachers leaving are community members, who are being replaced with outsiders who do not care about the students.

“We had some retirees that were local,” Whan said. “Retirements are going to happen sooner or later. We had some locals that went private sector, and of the 30, we did lose some locals. We have a pretty substantial number of community members who are teachers, but of the 30, it’s not a majority.”

December’s Spill the Beans session will feature Holly Young, health educator at Van Buren/Cass District Health Department. She will speak about senior health concerns in our community, and citizens will have a chance to ask questions regarding public health in Cass County.