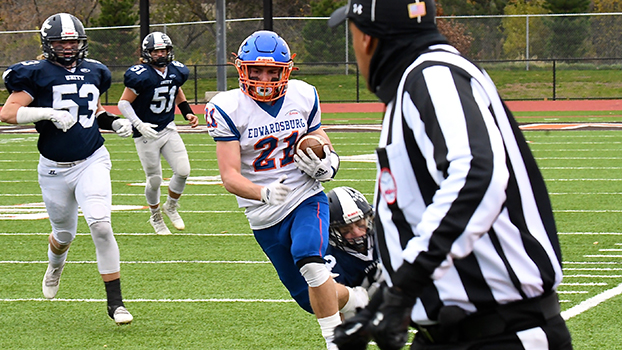 Senior Connor Ostrander (21) had the lone touchdown for the Eddies in their 58-8 loss to Unity Christian Saturday. (Leader photo/KELLY SWEENEY)

PORTAGE — There was no debating who was the best football team when No. 3-ranked Hudsonville Unity Christian defeated No. 2-ranked Edwardsburg 58-8 in the Division 2 state football semifinals Saturday afternoon.

Veteran Edwardsburg Coach Kevin Bartz certainly was not going to debate it after his team allowed more points to the Crusaders (58-56) than it had all season.

“That is the best football team we have played in my 27 years,” he said. “We compare them to the Muskegons and the Chelseas and the Lansing Sextons and the GRCCs [Grand Rapids Catholic Central]. There is no comparison. We had no answer on either side of the ball.”

Heading into Saturday’s semifinals, played at Portage Northern High School before a crowd of more than 4,000 fans, Bartz said that every possession for both teams would be important. He was correct, as Unity Christian scored touchdowns on all eight of its possessions, while the Crusaders gave up just a first-quarter touchdown to the Eddies and held them to 315 yards of total offense. Edwardsburg came into the game averaging 409.3 yards per game, including 369.3 on the ground. The Eddies had just 202 yards rushing against a fast, physical Unity Christian defense.

The Crusaders forced five three-and-outs against the Eddies.

“We were hoping we could come in and move the chains by getting three or four yards at a time,” Bartz said. “We knew we wouldn’t break a lot of big stuff on them, but I didn’t expect them to be that good defensively.”

The Crusaders set the tone defensively on Edwardsburg’s opening drive. Facing a fourth-and-2 at its own 45-yard line, Eddies’ quarterback Jacob Pegura tripped over an offensive lineman coming out from under center and went down for a 1-yard loss.

After turning it over on downs, Unity Christian went 55 yards in nine plays to make it 8-0 as quarterback Cameron Chandler covered the final five yards. Chandler would score on a 32-yard run on the Crusaders’ next possession after forcing a punt by the Eddies.

Edwardsburg (12-1) showed some life on its next drive as Connor Ostrander scored to cut the Unity Christian lead to 14-8 after he raced down the Eddies’ sideline 58 yards on a broken play.

From there, it was all Crusaders, who finished the game with 521 yards of total offense, led by Abraham Rappuhn, who rushed for 197 yards on 12 carries and scored three touchdowns. Rappuhn’s runs covered 4, 52 and 81 yards. His 81-yard run came after Edwardsburg punter Trevor Houseworth got off an 80-yard punt, which was downed at the Crusaders’ 1-yard line.

Chandler connected with his twin brother, Drew Chandler, on a 24-yard scoring pass to start the second half. It made it 44-8 and started a running clock for the remainder of the contest. Cameron Chandler would finish the day with 75 yards rushing on nine carries, while he was 1-of-2 passing for 24 yards. Drew Chandler added 67 yards on 13 carries.

Ostander led the Eddies with 75 yards rushing on eight carries. Logan McColley added 49 yards on 14 totes. Pegura was 8-of-10 passing for 113 yards. Jacob Walker caught three of those passes for 53 yards. McColley had a pair of receptions for 34 yards.

Defensively for Edwardsburg, Isaiyah Swartz had eight and a half tackles. A.J. Obren had seven stops, with McColley and Oscar Morris both finishing with six tackles.

Unity Christian advances to the Division 4 state championship game at Detroit’s Ford Field at 7:30 p.m. Friday. The Crusaders will take on top-ranked Chelsea.