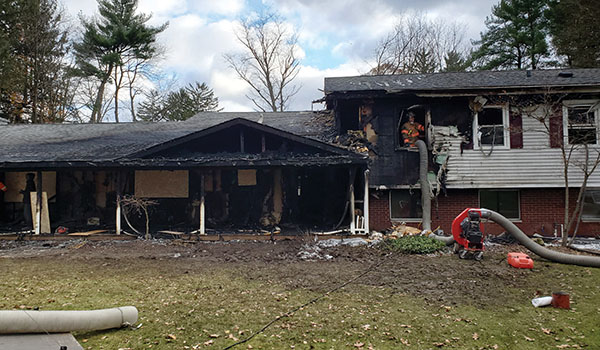 NILES — A fire that blazed for hours Monday morning has left a Niles home severely damaged, though its owner said he was just glad that none of its residents were injured by the flames.

According to city of Niles Fire Captain Don Wise, units were called to the scene of a house fire in the 1100 block of Wesaw Street at 4:17 a.m. Monday. When units arrived on the scene, the front of the home was engulfed in flames. Though the fire was put out before 10 a.m., Wise said the entirety of the home sustained severe fire, smoke and water damage.

“When the family woke up, there was already fire in the attic, fire in the basement,” he said. “The damage is substantial.”

At the time of the fire, there were three adults and a child inside the home, along with several pets. All were evacuated prior to firefighters arriving on scene, and none were injured. According to Wise, a Niles Township firefighter sustained minor injuries but did not require medical transport.

Homeowner Shadd Fein said he was awoken by a smoke detector on the first floor of his home. Initially, he believed he was hearing his usual morning alarm, but once he realized there was smoke coming up to the second floor where he and his wife were sleeping, he rushed to evacuate his family from the home.

“I just wanted to make sure I got my family out. That’s all I was thinking about,” he said. “I don’t really care about the house, God’s honest truth — just as long as everyone is safe.”

“Make sure you check the batteries on your smoke detector, that’s for sure,” Fein said. “We wouldn’t be here if it wasn’t for that.”

Fein said he is grateful his family is safe and to the responding fire departments for putting the fire out.

“I feel really good that we’ve got this great fire department,” he said. “I thought my house was going to be burnt to the ground, but they came in and saved it. They did a fantastic job.

The investigation into the fire is ongoing, but Wise said he believes the fire started in the basement and is electrical in nature.

The Niles City Fire Department was assisted at the scene by Niles Township, Bertrand Township and Howard Township fire departments.