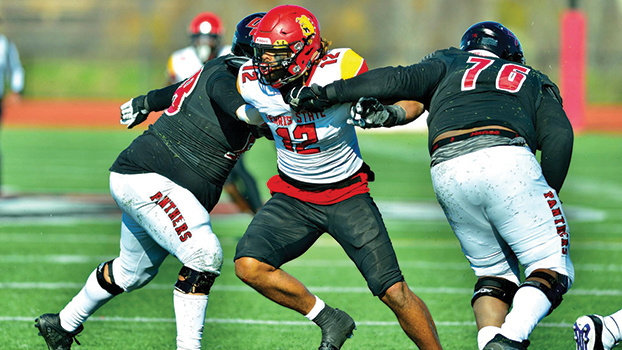 BIG RAPIDS — Murphy’s Law states that if anything can go wrong, it will.

When Ferris State University defensive end Caleb Murphy lined up on the football field this year, he made sure things often went wrong for opposing offenses.

The 6-4, 245-pound Dowagiac native was named the Great Lakes Intercollegiate Athletic Conference Defensive Lineman of the Year in voting by the league’s member head coaches.

“It’s amazing,” Murphy said. “If anybody knew about the year I had before this, they know how hard I worked. I did a 180 with my life and the ways I operated; everything changed and I felt like everything was against me. I found beautiful people and teammates who loved and cared for me and bought into the culture and just kept my head down. It’s a blessing and I thank the lord himself.”

Murphy emerged as a force to be reckoned with for the undefeated Bulldogs, who are ranked No. 1-ranked in NCAA Division II.

Through 10 games, Murphy has totaled 43 tackles with 14 for loss, nine sacks, one interception and two forced fumbles. His nine sacks lead the Great Lakes Intercollegiate Athletic Conference and are good for the fifth-most in the country.

Murphy credits his teammates and coaching staff for allowing him to have success on the field.

“My teammates work really hard,” he said. “I told myself that I had more in me. I took things more serious, which involved getting in better shape. My confidence is up and the sky is the limit.”

After the 2020 season was cancelled due to the ongoing pandemic, Murphy and his teammates were determined to take that year to prepare for a championship run this year.

“We had a full year off, and everyone was excited to play,” Murphy said. “We didn’t let anyone close the gap on us. We worked hard in the weight room and made the most of our practices.”

Murphy on the move

Following a standout prep career with Dowagiac, which saw him earn all-state, all-region and all-conference football honors as a junior and senior, Murphy signed with Grand Valley State University in Allendale, MI. After spending one year with the Lakers and redshirting — a move to delay or suspend an athlete’s participation in order to lengthen their period of eligibility — Murphy opted to transfer to Ferris State University in Big Rapids, MI, which was coming off an appearance in the Division II National Championship game.

For Murphy, it was Ferris’ winning culture created by head coach Tony Annese that drew him to Big Rapids for a fresh start.

“I’ve known [Annese] for years,” Murphy said. “My oldest brother went here and my younger brother Cailyn goes here. I’ve never been able to play with him on the same team. … They have a winning culture. [Defensive line coach] Tesfa Smith sends guys to the NFL. I love the coaches. They gave me an opportunity, and I ran with it.”

Murphy’s brother, Cailyn, was a standout player for Dowagiac before signing with Ferris in 2020. The two brothers have enjoyed the opportunity to play together.

“It’s amazing being able to pad up together,” Murphy said. “I’m an outside backer, and he’s a receiver. I tackled him for the first time this past fall. It’s something I always wanted to do and I got the opportunity to in college. I get to help him grow and he helps me grow.”

With the regular season in tow, Murphy and the Bulldogs are gearing up for a championship run. Ferris has a bye in the first round of Division II playoffs and will face the outcome of Saturday’s matchup between rival Grand Valley (9-1) and Lindenwood (9-2) Saturday, Nov. 27.

“If we play our game, we’ll be okay,” he said. “We can’t overlook anyone. We just need to be ourselves keep our energy high. We’re ranked number one, but that doesn’t matter if we don’t win. Unless we get selfish, we should be fine.”

Murphy hopes to deliver a football championship to Big Rapids before eventually achieving his dream of playing in the National Football League.

“That’s my goal,” he said. “I have another year of school left. I want to stay focused on what’s happening right now, but I believe I have a chance as long as I do that. I will continue to stay humble and be thankful for what I have. Working hard and reaching the NFL is my main goal.”

When he’s not making plays on the football field, Murphy is hard at work earning a criminal justice degree with the goal of being a juvenile probation officer if the NFL does not work out.

“I love kids,” Murphy said. “I would love to use my platform to tell them that they can do anything they set their minds to. ‘I did it, so why can’t you?’ To have a positive effect on kids would be amazing.”

Murphy was a multi-sport athlete during his time in Dowagiac, participating in football, basketball, baseball, track and wrestling.

A prep memory that resonates with Murphy to this day was the Dowagiac boys basketball team’s run to the Class B regional final in 2018, which saw the Chieftains fall to eventual state champion Benton Harbor 67-57.

“It was a great game,” Murphy said. “I felt the community was there for us no matter what. I remember missing a dunk from the free throw line that I should have made.”

Despite having a busy fall, Murphy still keeps tabs on the Dowagiac football team. While the 2021 season saw the Chieftains finish with a 0-9 record, Murphy is optimistic the program will get back on track and urges the players in the program to be patient.

“They are a young team,” he said. “The off-season is very important. You have to keep a positive mindset no matter what. Hit the weights and keep your goals in front of you. Everything is going to come together.”

Both on the field and in the classroom, Murphy aims to be a role model kids in Dowagiac and Southwest Michigan as a whole can follow.

“I want them to know anything is possible,” he said. “I’m just showing them that you can do anything you put your mind to. I want them to know that even if you’re from Southwest Michigan, the right people will find you if you continue to put in work. No one can stop you but you.”

No matter how far the game of football takes him, Murphy will always think of Dowagiac as his home and the place where his dreams began.

“I have the best friends there,” he said. “My community was the best. I always felt the love and support, no matter what. Our community always showed love.”