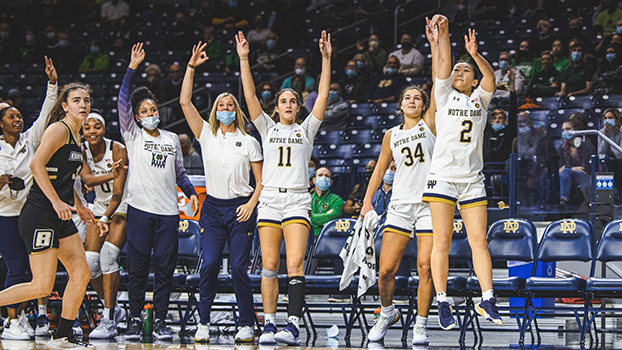 NOTRE DAME, Ind. — The Notre Dame women’s basketball team used a balanced attack as six players scored in double figures for the first time since Dec. 16, 2018, in a 94-35 victory over the visiting Bryant Bulldogs.

The Irish were led by Maddy Westbeld’s 19 points, Dara Mabrey and Olivia Miles each tallied 14, Sonia Citron had 13, Natalija Marshall scored a career-high 11 points, and Abby Prohaska added 10 points off of the bench in the winning effort. Miles dished out a career-high 14 assists in the victory.

With the 94-35 win, the Irish improved to 5-0 to start the 2021-22 season, extending the longest winning streak in the Karen and Kevin Keyes Family head coach Niele Ivey-era, and is the longest winning streak since the Irish won 14-consecutive games in the 2018-19 season. It’s the most consecutive wins to begin a season since that same 2018-19 season.

Notre Dame utilized a run of 21-0 over 9:43 in the first half to put a lengthy distance between the two teams, and the Irish had their largest run of the evening at 23-0 in the second half to put the game away.

After falling behind in the first quarter, the Irish defense locked down Bryant, holding the Bulldogs to just 16 points in the first half. It was the fewest points allowed in a half for the Irish since allowing 19 at Florida State on Feb. 25, 2021. The Irish allowed less than 40 points for the first time since holding Clemson to 37 during the 2017-18 season.

Bryant jumped out to an early lead in the first quarter, holding its largest lead of the game 5-2 three minutes into the contest. The Irish charged back and took their first lead of the game at 8-7 and went on a 9-0 run over the next two minutes to extend the lead to 15-7 with 2:46 remaining in the quarter.

Notre Dame closed out the first quarter on a 4-0 run over the final two minutes and continued that run into the second quarter. The Irish didn’t allow a Bryant score until 2:14 remaining in the first half, ending a 21-0 run that lasted 9:43 of game action. It matches the run that closed out the end of the Syracuse matchup a week ago, Sunday.

The third quarter saw much of the same as the Irish began the frame with a 10-2 run, capped by a Mabrey three as Bryant called a timeout with 6:26 remaining in the quarter. After cutting the Irish lead to 33 with 5:05 left in the third, the Bulldogs would get no closer the rest of the way as the Irish rode a balanced offensive attack and a tremendous defensive effort to secure the victory.

The Irish take off to Florida for the Daytona Beach Invitational this weekend. Notre Dame will face off with Georgia and Oregon State, Nov. 26 and Nov. 27, respectively.