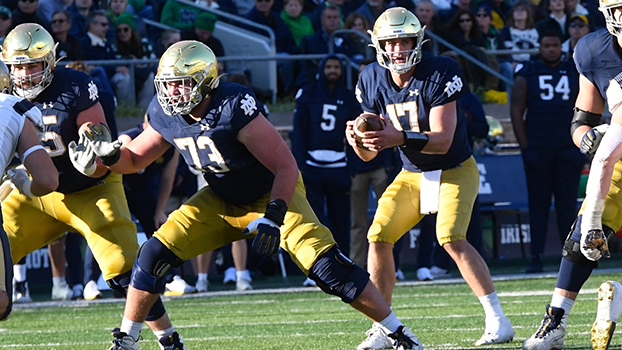 NOTRE DAME, Ind. — What started as a cold and somber morning in South Bend turned into a frenzy as Notre Dame bid farewell to its senior class the only way it could on a Saturday afternoon.

As it entered the stadium for the final time, the team faced a familiar opponent in the Georgia Tech Yellowjackets. The Fighting Irish came away with a decisively 55-0 victory at Notre Dame Stadium.

“It was a great day,” said Notre Dame Head Coach Brian Kelly. “You don’t get many of these opportunities as a head coach where you have a senior day and you have a resounding victory.”

The seniors proved to be a major X-factor, both on offense and defense, leading to the team’s success.

Quarterback Jack Coan continued to improve his passing, breaking his previous passing record with 285 yards and completing 75 percent of those passes on the day. Another key factor in the passing game came from senior wide receiver Kevin Austin, who had 89 receiving yards, including a 51-yard catch in the second quarter.

The tenured members of the Irish defense also played a major role, with linebackers Bo Bauer and Isaiah Pryor leading the way with a combined 16 tackles out of the team’s overall 73, eight of which were solo tackles. Pryor also had a sack for his efforts, adding to six that the Fighting Irish recorded.

Notre Dame extended its streak of not giving up a touchdown to three games.

Not to be outdone, the underclassmen of the Fighting Irish also contributed in their teammates’ final home game. Junior Kyren Williams once again performed with 56 rushing yards, two touchdowns, and 31 receiving yards.

On the defensive front, junior linebacker Jack Kiser contributed to the scoring drive with a momentum-boosting 43-yard interception in the first quarter that set up the Notre Dame scoring drives that would follow.

According to Kelly, the combined efforts of the upper and underclassmen is a major factor in the team’s success.

“This whole team has been about young players merging with veteran players and how that has made this a special season,” he said. “It’s not easy when younger players are put into the mix with veteran players, but we have a young group of players in our locker room that are selfless, that model to what our upperclassmen do.”

One such highlight of the team meshing together came in what would be the final scoring play of the game.

A tackle in the third quarter from sophomore defensive lineman Isaiah Foskey would lead to a fumble that senior teammate picked up, and fellow lineman, Myron Tagovailoa-Amosa, leading to a 70-yard touchdown return.

“That was a cool moment,” Foskey said. “I was trying to show him that I had his back, and he got mine with a touchdown. So everything worked out.”

Notre Dame moves on to their final game of the regular season at Stanford Saturday.