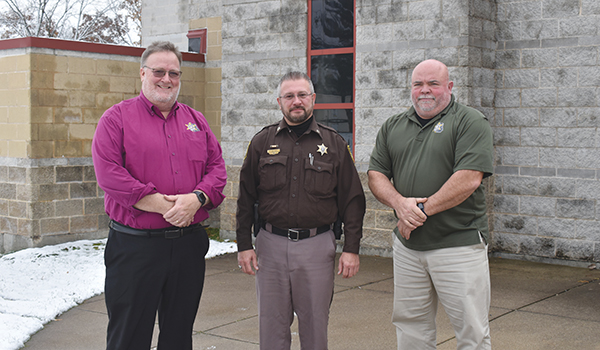 CASSOPOLIS — Things are getting a bit hairy at the Cass County Sheriff’s Office.

The Cass County Sheriff’s Office recently kicked off its No Shave November fundraising campaign. For the event, deputies, who typically are required to be clean-shaven, can grow out their facial hair for a donation. All money raised from the event will go to support local nonprofit organizations.

“Each year, I start getting asked by my male staff — it starts around September — people want to know if we are doing No Shave November, this year,” said Cass County Sheriff Richard Behnke. “It’s something they look forward to.”

During the annual event, the Cass County Sheriff’s Office’s No Shave November campaign has donated to local charities such as Feed the Hungry of Cass County, Domestic and Sexual Abuse Services and Cass County Cancer Service, which are voted on by the sheriff’s office employees. Last year, the office set a record by collecting $5,000 through participants and community donations. This year, Behnke said there is no way to know how much could be raised.

“We don’t want to set too lofty of a goal, but of course, we always want to raise $1 more than we did the year before,” he said with a laugh. “Last year, we got the community involved and were really happy with the results. … We had a couple of big contributors that helped us.”

For the past few years, the sheriff’s office has extended the fundraising campaign into December. This year, for the first time, the department will be extending No Shave November into January. Behnke said he was inspired to make the move by observing other sheriff’s offices around the state do the same.

In addition to giving back to the community, Behnke said No Shave November is a positive experience for his employees as well.

“This is something fun as well as something to give back,” he said. “It is a policy for our deputies to be clean-shaven. We are a bit more traditional in that way, so this is a chance for them to have a little bit of fun with this while giving back to the community.”

Behnke said the community is welcome to donate to the campaign by contacting the office at (269) 445-1201 or sheriff@cassco.org.

“This is all about local charities that are working in our communities, and every dollar goes to help them,” Behnke said.