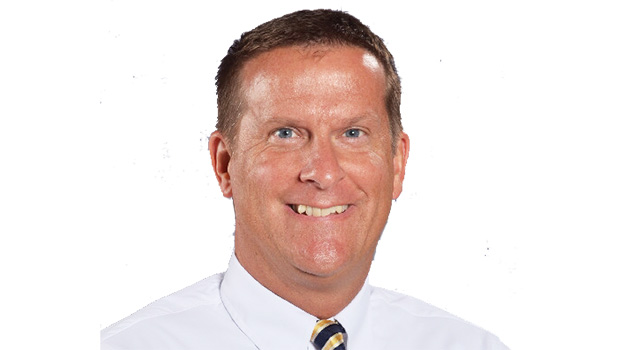 St. Joseph’s Kevin Guzzo is one of three recipients of the MHSAA’s Bush Award. (Submitted photo)

EAST LANSING —St. Joseph’s Kevin Guzzo, Birmingham Groves’ Thomas Flynn and Bay City Western’s Michael Thayer are leaders of Michigan high school athletic programs who have put education and providing a positive student experience at the forefront of their work, while also becoming known among colleagues for their guidance and assistance to others striving to build the same foundations at their schools.

To recognize not only their work within their districts but their impacts on many other leaders in athletic administration, Guzzo, Flynn and Thayer have been named recipients of the Michigan High School Athletic Association’s Allen W. Bush Award for 2021.

Al Bush served as executive director of the MHSAA for 10 years. The award honors individuals for past and continuing service to school athletics as a coach, administrator, official, trainer, doctor or member of the media. The award was developed to bring recognition to people who are giving and serving without a lot of attention. This is the 30th year of the award, with selections made by the MHSAA’s Representative Council.

Guzzo has begun his 26th year with St. Joseph Public Schools and 18th as athletic director after previously serving as a coach and teacher. He earned his elite certification in the MHSAA Coaches Advancement Program in 2014 and has served as a CAP instructor and as an instructor for the National Interscholastic Athletic Administrators Association Leadership Training Institute. He also has served as chairperson representing the MIAAA on the Five State Exchange Committee. A frequent contributor as well to MHSAA Committees for sports, officials, classification and site selection, Guzzo recently contributed as part of the MHSAA Multi-Sport Task Force.

He received his certified athletic administrator designation from the NIAAA in 2007 and was named an MIAAA Regional Athletic Director of the Year in 2015.

Guzzo graduated from Bessemer High School in 1991, then earned his bachelor’s degree in secondary mathematics at Western Michigan University in 1995 and master’s in math education from WMU in 2001. He has been active in the St. Joseph Lions Club, First Tee of Benton Harbor and the local Senior PGA Tournament Committee.

“Kevin has become a real leader in the southwestern corner of the state, and in many rooms has grown into a veteran voice of reason on many topics and issues,” said MHSAA Executive Director Mark Uyl. “He’s taken what he’s learned over the years and incorporated it into his teaching as a Coaches Advancement Program instructor, and we are thrilled that we have many beginning coaches who one of their first mentors is a person like Kevin through CAP.”

Flynn has begun his 21st year as Birmingham Groves High School athletic director and 32nd overall at the school after beginning as a teacher. He has served as a host of MHSAA Tournament events in team and individual wrestling, girls and boys diving, girls and boys tennis, girls and boys basketball, baseball and softball, football, ice hockey, volleyball and girls and boys soccer. Flynn also has served on MHSAA Committees for wrestling, gymnastics, swimming & diving, tennis and various officials topics. He made Groves the home of all Metro Detroit Officials Association meetings and has received recognition for his service to the Oakland County Wrestling Officials Association.

He graduated from Hillsdale High School in 1984, then earned a bachelor’s degree in biology with an emphasis on sports medicine from Grand Valley State University in 1990. He received a master’s in sports administration from Wayne State University. Flynn also has served on the Birmingham Bloomfield Community Coalition.

“Tom is a guy who is willing to do anything to assist the MHSAA. He’s hosted an Individual Wrestling District for 20-plus years, and that’s far-and-away the most difficult event to host – and he wants to do it every year,” Uyl said. “Tom is not afraid to do the dirty work, but he’s also not afraid to speak up, and that’s something I’ve always admired and appreciated about him.”

Thayer has begun his 25th year as an athletic director and also serves as an assistant principal at Western. He served at Merrill Community Schools from 1995-2007 before arriving at Western with the start of the 2007-08 school year. He also is a frequent MHSAA Tournament host and has been a valued voice on a variety of MHSAA Committees, including the Multi-Sport Task Force and selection committee for the MHSAA-Farm Bureau Insurance Scholar-Athlete Awards. Additionally, he has served as the MIAAA’s historical records chairperson and as part of its public relations committee.

Thayer graduated from Muskegon Orchard View High School in 1986, then earned his bachelor’s degree in business teaching from Central Michigan University in 1990 and master’s in educational administration/school principalship from CMU in 2003. He also is a CAP elite-certification graduate. He has served as a trustee for Thomas Township – with membership in the Michigan Township Association – and been active in the Shields Lions Club.

“Mike has been one of the true leaders of the Saginaw Valley League for a long time, and he’s really become the point guard of that league over the last five years,” Uyl said. “If ever someone should be defined for quiet, steady leadership, it’s Mike Thayer. It’s always about substance with Mike. He’s as reliable an athletic director as there is in the country.”