Something has to give Saturday in Division 4 semifinals 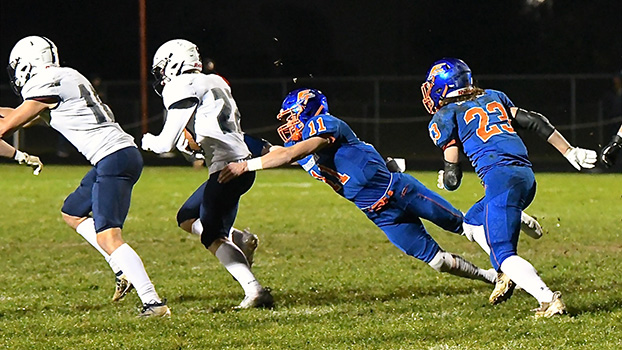 The Edwardsburg defense will have to try and slow down the highest scoring team in the state when it faces Unity Christian Saturday afternoon. (Leader photo/KELLY SWEENEY)

EDWARDSBURG — Two of the highest-scoring teams in the state of Michigan are set to square off at Portage Northern High School, with a trip to the Division 4 Football Finals hanging in the balance.

Hudsonville Unity Christian (12-0) and Edwardsburg (12-0) come into the Division 4 Semifinals, scoring a combined 1,324 yards through 12 games. The Crusaders, who hold the record for most points scores through 11 games in Michigan High School Athletic Association history, are trying to join the Eddies in the 700-point club.

Unity Christian would be the sixth team in state history to score at least 700 points in a single season. Edwardsburg scored 705 points in 2018 on its way to the Division 4 state championship.

Heading into Saturday’s clash of unbeatens, the Crusaders have scored 693 points and the Eddies 628.

While both teams are averaging better than 50 points per game, veteran Edwardsburg Coach Kevin Bartz does not think either side will light up the scoreboard.

“I don’t see there being 100-plus points scored between the two teams on Saturday,” he said. “I think because of the familiarity of the offense to both teams that the defenses will play a key role in the contest slowing each other down. This game is going to come down to the number of possessions and who capitalizes on those possessions. Turnovers and penalties will be huge this week.”

Bartz added that negative plays could also affect the outcome.

“Neither team is designed to work behind the chains,” he said. “Any penalty that disrupts the normal flow of the offense and prevents a first down could be very costly. Turnovers cannot occur. The loss of possession by a turnover [fumble or failing to convert a fourth down] would be a costly error that will be difficult to make up. Neither team has thrown a lot this season, but both teams do have the big play potential to use the pass.”

With the Crusaders and the Eddies both running Wing-T-style offenses that put up a lot of points, the advantage on Saturday may go to the Edwardsburg defense, which has been stingier than Unity Christian’s.

The Eddies allow their opponents just 4.7 points per game, while the Crusaders give up 13 points per game. Edwardsburg has six shutouts compared to just one by Unity Christian.

If Bartz is correct and the game is close, special teams could end up playing a factor.

“I also think that the kicking game will be important this week,” he said. “Both teams have kickers that can consistently put the ball in the end zone on kickoffs, which will force the opponent to go 80 yards for a touchdown. Each kicker also has the potential to hit field goals from 45 yards and in. Neither team has punted much this year, but punting and field position may be a factor in this game.”

The Crusaders have yet to punt in 2021, while the Eddies have only attempted three punts.

Edwardsburg is no stranger to playing in big games against quality opponents. Unity Christian might be one of the best the Eddies have faced on the offensive side of the football.

“We have seen several great football teams over the past several years of playoffs [Lansing Sexton, Grand Rapids Catholic Central, Chelsea, River Rouge, South Christian, Muskegon, Zeeland],” Bartz said. “I think that Unity Christian fits into the top three of offensive abilities and difficulty to stop. The precision and strength of their offensive line and speed of all four backs make them extremely challenging to stop.”

Like the Eddies, the Crusaders have a stable of running backs that they interchange throughout the contest. Bartz said that the quarterback is probably the best of the bunch.

“I think the QB [Cam Chandler] may be the most dangerous of the four, but they all have the capability of breaking a big play at any time,” he said. “Their offensive line is also very quick and physical. The speed of the running backs is only as good as their ability to get the ball into the secondary. The blocking of their line gets them there quickly and often.”

Kickoff Saturday is scheduled for 1 p.m. Tickets are available online at GoFan.co.