Feed the Hungry campaign kicks off with police and fire escort, donation from Honor CU 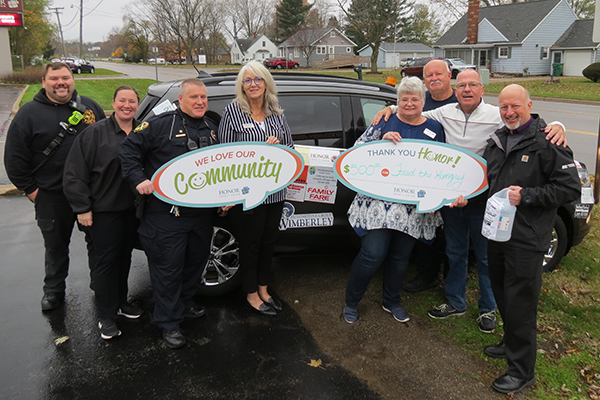 After receiving a $500 check from Honor Credit Union to kick off the campaign on Wednesday, Feed the Hungry Chairman Jim Allen, ACTION Ministries media liaison Jeff Neumann and Norma Greenman of Honor Credit Union were escorted by Dowagiac Police and Fire vehicles to 1st. Source Bank to deposit the check.

What began as a way for Chuck Wimberley, owner of auto dealership C. Wimberley Automotive Group, to give back to the community during the holidays, has grown into city-wide donation tradition with contributions from dozens of local businesses through the years.

1st Source Bank was one of the first to step up, and Honor Credit Union came shortly after, according to Allen.

“When we started this, we weren’t sure what the community was going to say,” Allen said. “They jumped right up and said, ‘yeah, we’d like to be a part of it.’ They didn’t know it was going to be this successful, so the ones that got out first were really a big deal because they were taking a chance.”

In its first years, the campaign took in about $2,000 in donations. After two years, the number was up to $10,000 and then they joined forces with ACTION Ministries and its network of mobile food pantries.

“The president of ACTION Ministries and I approached Jim and said we can turn that $10,000 into 100,000 pounds of food by going to this mobile pantry philosophy,” Neumann said. “The last nine years, we’ve been pulling in mobile pantries 10 or 20 times a year, and bringing over a hundred thousand pounds of food with the money we collect.”

For every $1 Feed the Hungry raises, ACTION Ministries is able to purchase $6 worth of food, Allen said. Mobile food pantries sponsored by ACTION deliver food to areas twice a month.

Through the years, the donations have continued to grow, reaching $45,000 in donations in 2020, according to Allen.

“We needed them and they needed us,” said Allen about ACTION Ministries. “They make it work beautifully. They took program that we had the vision for, and showed us how to do it right.”

Allen and Neumann said the way the community has embraced the campaign has been incredible.

“They’re on board and they know that we’re doing right with it,” Neumann said. “I think they trust the program and ACTION ministries.”

According to Allen, 100 percent of donations go toward the project, and the food donations generally stay within the community. He added the group also has helped out with donations during the Flint water crisis.

For Dowagiac Police Chief Steven Grinnewald, helping with the campaign is another way for the department to serve the community.

“This helps out so much for so many people that need it,” Grinnewald said. “Jim likes to think we have a lot of influence, so that’s a good thing that we can use influence this way to help out and make sure people get taken care of because we all need that, and we want that just as much as anybody else. So, it really means a lot for us to be a part of this, to be included and to do something good.”

In addition to Honor Credit Union’s donation, C. Wimberley has donated $5,000, as well as two vehicles used to promote the campaign.

For more information on how to donate, contact Jim Allen at 269-779-1691. Donations can also be made by making out checks out to “Feed the Hungry” and depositing at 1st Source Bank, 223 S. Front St. Cash drop-off boxes are also available at 1st Source, Honor Credit Union, 56337 M-51 S., and Dowagiac Credit Union, 473 E. Division Street.