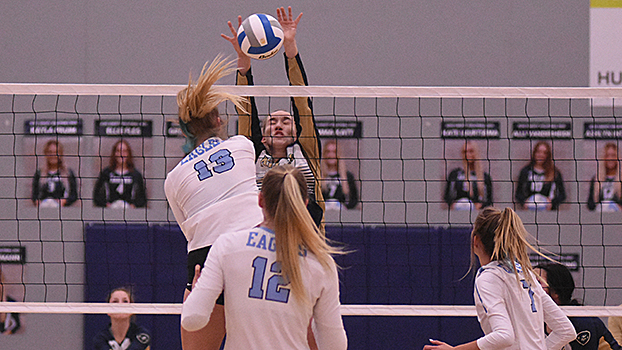 The Vikings, ranked No. 6 in the final Prep Dig poll, gave the Eagles, who were ranked No. 1 in Prep Dig, everything they had in two of the three sets. In the end, Christian’s size overcame Niles’ fight in a 25-18, 25-4 and 25-20 quarterfinal loss at Grand Rapids South Christian High School.

There was also too much Evelyn Doezema. The Michigan State-bound 6-foot-3 senior finished the match with 19 kills, multiple blocks and forced the Vikings to alter their shots more than a handful of times.

“I am really proud of what we did,” said Niles Coach Jenny Nate. “Defensively, we dug her, we blocked her and we stayed with her. I am a proud coach. We fought for every point. They gave it everything they had. They earned their way to the quarterfinals against the No. 1 team and the three-time defending state champs. We end the match losing 25-20. Of course, we wanted to win, but I will take that. These girls are the real deal.”

If there was any expectation that the match would be a walk-over for the Eagles, it ended in the opening moments of the first set when Niles reeled off eight straight points and grabbed the lead on Christian. It did so by blocking Doezema and her teammates multiple times, finding holes in the blocking of the much taller Eagles and digging up their attempt to overpower the Vikings.

First-year Christian Coach Betsy DeVries, who replaced the retired Tiffannie Gates, who led the Eagles to their three state titles, was forced to call a time out to get her team to regroup.

“We just had to settle in and stay aggressive,” DeVries said about the message during the time out. “They had blocked us a few times. I told my girls to keep swinging. They did. We also needed to settle in with our serve-receive a bit.”

The Eagles finally caught the Vikings at 12-12. The match went back and forth over the next few points before Christian started to open up an advantage. Niles was forced into its own timeout after the Eagles took an 18-15 lead. They would go on to take the first set by outscoring the Vikings 7-3.

Energized by their comeback win in the opening set, Christian dominated the second set behind its serve and the play of its front line.

“We had some really aggressive serving,” DeVries said about winning the second set. “I do not think the second set reflects the true competition of the match. They [Niles] gave us a great game. I think the scores of the first and third reflect a little more of how the match actually felt when we were out here.”

Niles (47-9) fell behind 10-4 in the final set, but would not disappear. The Vikings clawed their way back into the set, cutting the Eagles’ lead to 14-13. The two teams went back and forth in the opening set, with Christian pulling away at the very end to close out the match.

“We didn’t get the outcome we wanted,” Nate said. “We went down swinging against the No. 1 team. I told our team to walk out of that gym with their heads held high and be proud of what they accomplished this year. And I know that these 14 girls [five seniors] have inspired all of our future Niles volleyball players and have shown them that with hard work, focus, energy, and dedication, anything is possible. And because of the example this team has set, we will be coming back strong, tough, and ready to work harder than ever again next year.”

Besides Doezema, the Eagles got six kills from Kate Breems and four blocks from Makenzie Ritsema. Grace Spoelma finished the match with 14 digs.

Nate applauded her seniors for the effort they have put into the program the last four years.

“The leadership they have brought, the culture and the energy we are known for all over the state, starts from the top down,” she said. “These girls have it. They have always had it. They bring it on the court, in the classroom, and in the way they treat each other. They are amazing.”

The cupboard is hardly bare as the Vikings’ roster was a mix of seniors and underclassmen.

“We have strong players all through the program who will be coming up,” Nate said. “Our starters are an eclectic mix of all three grade levels. These girls are workers. Knowing that, they will probably be studying film when they get off the bus.”

Grand Rapids Christian advances to the Kellogg Arena in Battle Creek for the Division 2 Semifinals at 4:30 p.m. Friday against No. 2-ranked Pontiac Notre Dame Prep.