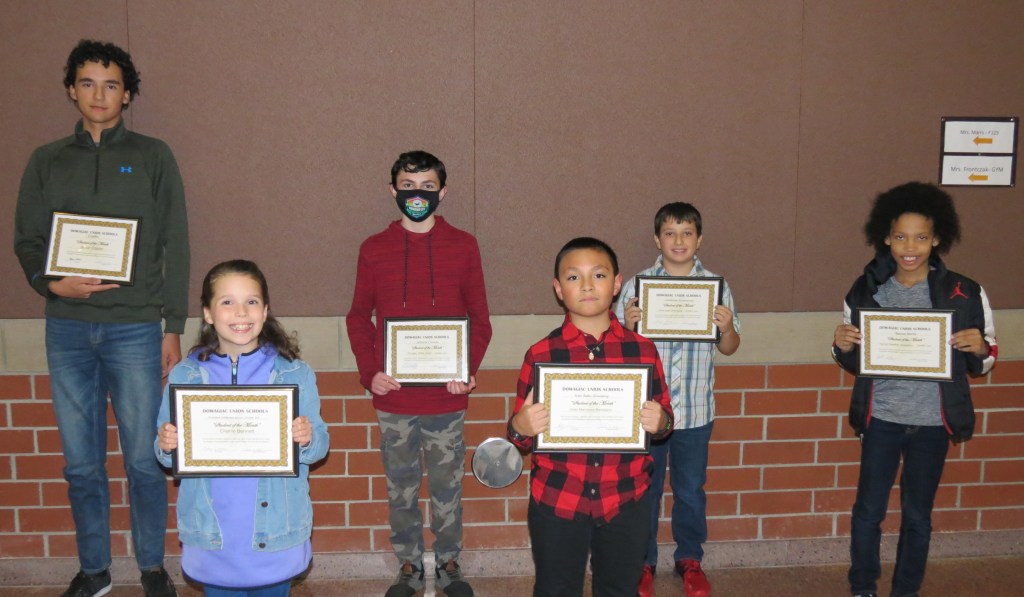 DOWAGIAC — Six local students have been selected for recognition by teachers and faculty for their outstanding performance in school this October.

Nominated by teachers and faculty from their respective schools in the Dowagiac Union School District, Charlie Bennett, Austen Burke, Spencer Corwin, Julian Manriquez-Mandujano, Cameron Hammond and Jacob Conley received certificates and T-shirts with their names on them for their accomplishments and attitudes in the classroom.

Bennett, a third-grader at Kincheloe Elementary, was nominated by teacher Jessica Gray. Bennett’s favorite subject is math, and she wants to be a zoologist when she grows up.

“She was chosen because of her hard work ethic, determination and positive attitude,” Kincheloe Principal Cathy Stone said. “Charlie always follows the class motto, ‘be a hero.’ She has high expectations for herself and she does smile all day long.”

Burke, a fourth-grader at Patrick Hamilton Elementary, was selected by teacher Laura Frye.

“Let me tell you, this kid right here is going places,” Frye said. “He has a good sense of humor, unbelievable knowledge of dinosaurs – definitely seeing a career path down that road – and he does his personal best on a daily basis.”

“Spencer is an all-around terrific student,” said DMS Principal Sean Wightman, reading from a statement written by Grear. “One quality about him that really stands out is that he isn’t afraid to do what’s right, even when everyone around him seems to be making poor choices.”

Corwin had advice for other students who may wish to become student of the month.

“Keep your grades up,” he said. “If you do that, you’ll be able to do other things you at school. Also, I recommend staying quiet so you don’t disrupt others from learning, and be friendly to everyone, especially the teachers. If you get on their good side, they’ll like you even more and help you more each day.”

Manriquez-Mandujano was nominated by Sister Lakes Elementary fourth-grade teacher Shannon Hatch. He loves to read and wants to be a cashier when he grows up.

“That was my heart’s desire as well, so maybe he will be a teacher,” Hatch said. “Being polite is just a part of who he is and how he treats others. He can always be trusted to follow the school rules and be kind to everyone.”

Hammond, a fourth-grader at Justus Gage Elementary, was nominated by teacher Ronna Page for good grades, being a great role model and being respected by his peers.

“He puts a lot of thought into his choices he makes at school,” Justus Gage Principal Bryan Henry said. “He even stays after school each day to help straighten up the desks, all without being asked. … “Cam hopes to be a police officer like his uncle. He would make a great officer as he is very compassionate person who wants to ensure that everyone is safe and happy at all times.”

Conley, a junior at Dowagiac Union High School, was nominated by math teacher Keith Klann. Conley has perfect attendance, has been on the high honor roll since sixth grade, and enjoys math and science.  After high school he wants to attend the University of Michigan to study physics.

He plays saxophone in the marching band and concert band, and advises fellow students to be good at math, because it is the primary subject that helps you relate to what you need in the real world.

“Jacob’s a perfect choice for October 2021 student of the month due to his willingness to assist other students both inside and outside of the classroom.” DUHS Assistant Principal Brian Sperling said. “He’s a role model for others without even knowing it.”