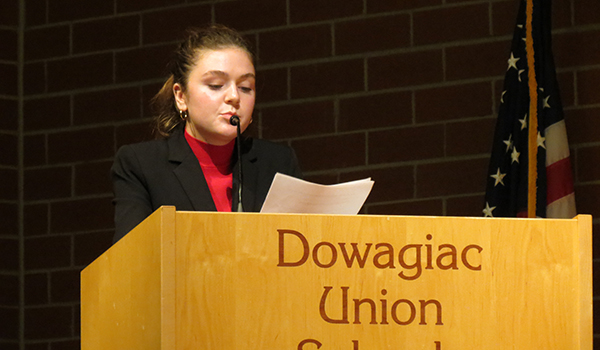 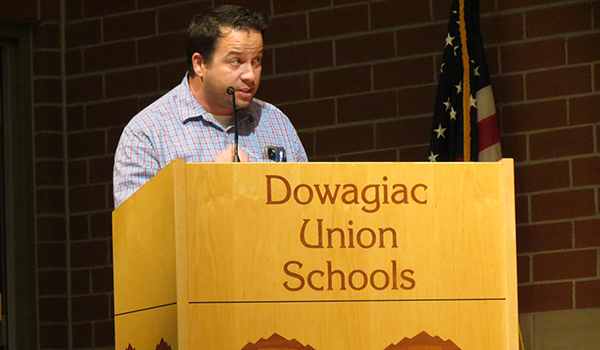 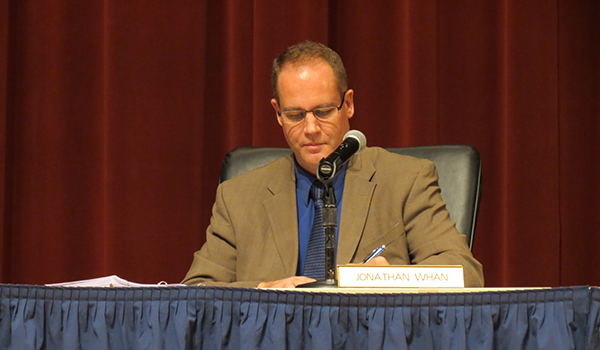 Local residents, teachers, students and parents showed up by the dozens to the Dowagiac School Board meeting Monday at Dowagiac Middle School, with 13 taking to the podium to voice their support for district teachers, displeasure with the leadership of the school board and concern over growing student violence in the district.

The resignation of Band Director and teacher Shane Oakley, approved by the board Monday, furthers a trend of teachers leaving the district. About 30 teachers have left the district since Jan. 1, according to Superintendent Jonathan Whan, who said the reasons varied from retirement and personal reasons to unhappiness with the district.

Whan said he believes morale is low in part due to the COVID-19 pandemic, but acknowledged the lack of a contract is a contributing factor.

Regardless of the reasons, many who attended the school board meeting were not happy with the loss of educators, including Dowagiac Union High School senior Erin Beck, who spoke during the public comment portion of the meeting.

Teachers and the district remain in contract negotiations, which have been ongoing since September. According to Whan, negotiators for the district and Dowagiac Education Association had a tentative agreement at the end of September for a two-year contract, but when the proposal went to the teachers for a vote Oct. 8, it was turned down.

On Oct. 25, the two parties met again, and selected Wednesday, Nov. 17 for the next session of negotiations.

“The board and its negotiation team are committed to participating in the collective bargaining process with the goal of reaching an agreement that best serves the interest of all stakeholders and supports the education of the district’s children,” Whan said. “We, too, have the frustration of the number of teachers that have left. We acknowledge that number is larger than it has been in the past. … We are committed to finding the best possible candidates we can.”

Stacy Behnke, mother of two Dowagiac students and wife of DUHS teacher Michael Behnke, was one of many parents who expressed displeasure with the school board.

Sam Ausra, mother of three students in the district, said her children’s teachers have always gone above and beyond for their students, even going as far as to create lesson plans for her to use at home when one of her children was struggling in class.

“They are dedicated to their careers, dedicated to and love their students,” Ausra said. “Dowagiac has never lost staff members like this. Why? As a school board, how does that not worry you? My opinion is that this comes directly from the top, a direct reflection of the leadership of this district. Why are you not fighting more for the staff?”

Ausra said she believes the teachers are not being respected by the district leadership.

“Our teachers deserve better,” she said. “They are such an important part of the community, and right now, you are all failing them.”

Beck said her teachers who stayed are forced to take on more responsibilities due to the losses. She said the substitute teachers are not given adequate lesson plans, and she and her fellow students’ education is suffering as a result.

“If our teachers continue to leave, we will have to go back to distance learning because we won’t have the personnel to cover the current classes,” she said. “I pray ‘Welcome to Dowagiac’ comes to mean our teachers have a great contract that will attract and retain quality teachers, [so] that teachers from other school districts will see it as a privilege to [come to] Dowagiac. … Parents, too, would want their children to stay, and come to Dowagiac to the appropriately challenging classwork and reasonable class sizes tailored to help students.”

One of the last speakers was DUHS teacher and Dowagiac Education Association president Matthew Nicholls.

Nicholls said he was invited to a school board retreat over the weekend, and after teachers participated in a survey asking for their input regarding contract negotiations, he was “disappointed and dumbfounded” to see that the board apparently did not take their concerns into consideration at the meeting.

After the public comment, Board of Education President Ronda Sullivan said the teacher’s concerns will be utilized in future strategic planning sessions.

Outside of teacher concerns, many of the public comments were related to an increase in fights happening at DMS and DUHS. Several teachers who spoke reported several fights, including some that had taken place on the day of the meeting.

Frances Green, a fourth-grade teacher at Kincheloe, said her husband and his two children are DUHS graduates, while she has two boys currently attending the school.

“Today, I address you not as a teacher, but as a parent who is afraid of what is happening in our schools,” she said. “The last couple of weeks, we’ve seen 10 fights in the middle school, as many in high school, with three being today. I ask that steps be taken to ensure my child’s safety.”

According to Green, as well as other speakers, the district has been locking bathrooms, limiting hall passes and threatening students with virtual learning in response to the fighting.

After the meeting, Whan said he had not heard of the virtual learning threats but could explain the other policies.

“A couple of weeks ago, we had an uptick in some conflicts at the middle school,” Whan said. “What they were assessing was that there were too many kids in the hallways during class. So, in an attempt to try to get back to some more normalcy, and a little more structure, there were limited hall passes.”

Kristin Ausra, a Dowagiac alumna, a former teacher in the district and parent of two children in the district, said she is hearing about the bathroom and hallway policy changes from the children and not the school.

“I was told this had started a week before, because of all the fighting,” Ausra said. “A week later, an email regarding the policy change was sent out only after questions from parents were being raised.”

Whan said there has been an uptick in school aggression in many districts, and that the intent of the policy was to solve this, and not to deprive students of their bathroom privileges.

“For basically two years now, kids have had quite a bit less social interaction,” he said. “There have been some frustrations and problems with that, and so we’re continuing to move forward in working with students and parents to try and have the best, most organized and safe environment we can.”

In addition to other concerns, Ausra, as well as district paraprofessional Monica Fisher, said they were distressed to learn about an alleged school shooting threat from their children and not the school.

“The rumors of the supposed school shooting that was supposed to happen today were circulating around social media last week,” Fisher said. “It’s very upsetting as a parent to learn that it took parent outrage to get any form of communication. And then when we did get it, it was an email.”

Regarding the alleged threat, the school sent out a message, which was posted on the district website Nov. 11.

“There is an Instagram and/or Snap Chat post that has been recycled/shared multiple times, which refers to an event that is supposed to happen on Nov. 15,” the message said. “The statement was scribbled on what appears to be the wall of a bathroom stall. The student that is associated with the original post has never been a Dowagiac student. The statement was not in any of our stalls in the district.”

Whan said the school’s resource officer confirmed that the message had been circulating on social media throughout other school districts as well.

“We were trying to share information, trying to make students and the community feel better,” he said. “That was the intent.”

Fisher said to her, it does not matter if the threat was credible or not.

“Parents should be contacted regardless,” she said. “The tone of any organization is set at the top, and schools are no exception to that. But the difference is it’s just not the employees that are affected. It’s parents, it’s families. And most importantly, it’s our children.”

Whan said he believes it has been a rough past two years for everybody and understands the frustration.

“We’re living in extremely challenging times,” he said. “As a community, school district, state, nation – hopefully, we continue to work together, working to solve problems and trying not to create them.”