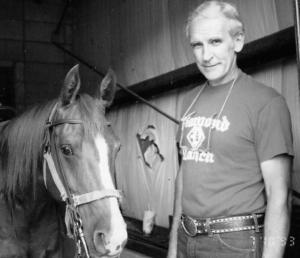 Mike was born and raised in the Michiana area and eventually settled in Cassopolis, Michigan with his loving wife, Barbara. Mike was the definition of a cowboy; strong, handsome, chivalrous, and absolutely loved nature. He founded the Diamond D Ranch in Cassopolis and ran it for over fifty years. Horses were his specialty and he loved nothing more than teaching others how to ride. One of Mike’s favorite travel stories involved a horse named Charlie. Mike and his dear friend Jim Misswick were the only two men to ever take a horse across the Mackinac Bridge and it was something that they were proud of their entire lives. He was very passionate about the local 4H programs, oftentimes keeping a close eye on the Berrien and Cass County clubs. Some of his most memorable traits would include his work ethic, his loyalty to family, and his charismatic leadership qualities.

Not only was he just a hard worker, he was educated as well. Mike graduated from Niles High School in 1957 and continued his education in Lansing, Michigan at Michigan State University. He was a loyal Spartan fan for the entirety of his life. Although Mike would be considered very successful, he always kept his humble, hometown values. He could fix just about anything he put his mind to. His favorite quick-fix material was binder twine and duct tape. There wasn’t much that Mike didn’t try through the course of his life. He loved to bowl, golf, and ski. He loved to take his wife to Colorado and ski the Steamboat Springs Hills. Mike also took a particular interest in firearms, and thoroughly enjoyed hunting. Some of the simpler things that he loved included his Dodge Ram truck, cherry pie, tequila salty dogs, and his beloved St. Bernards. Mike left an incredible legacy behind and will be dearly missed by his friends, family, and community.

He is preceded in death by both of his parents, Reuben and Helen (Armitage) Davis; two of his children, Pamela Hulecki and Jeffrey Richner; and two of his siblings, Carolyn Ryder and Ronald Davis.

A public visitation will be held at the Brown Funeral Home on Thursday, November 18 beginning at 5 p.m. with funeral services beginning at 6 p.m.

Memorial donations may be made to Jones Rough Riders 4H.