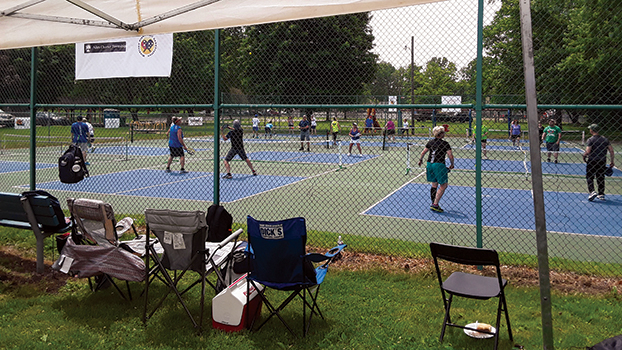 Niles Charter Township Park Board Chairperson Jill DeLucia was on hand for Monday’s meeting to make a proposal for the resurfacing of six pickleball courts located at South Fireman’s Park.

The five-year-old courts have received routine repairs each year, but due to harsh weather conditions, the courts have developed numerous cracks despite frequent use from pickleball players and park attendees. Pickleball is a recreational paddle ball sport that combines many elements of tennis, badminton and ping-pong.

DeLucia’s proposal calls for the excavation and removal of the six damaged courts and the installation of brand-new courts with new surfaces. The estimated cost of the project according to DeLucia would be $145,000.

“So far, a lot of court maintenance costs have been offset by the league and Michiana Pickleball Club volunteers, which is really not a sustainable model to be able to keep those courts functioning going forward,” DeLucia said.

Several members of the MPC attended the township meeting, including Mark Hempel, a representative of the club’s board of directors.

According to Hempel, the MPC has more than 300 members with ages ranging from 18 to 80.

Hempel believes the resurfacing of the pickleball courts would be an asset to the community.

“At Fireman’s, we hold leagues and we like to hold tournaments as well,” he said. “That brings a lot of people to this community. … It’s not only great for the pickleball group, but I think it’s good for the businesses in the area. We attract people from South Bend, Elkhart as far away as Goshen as well as Niles. We would love to see the township approve the resurfacing of the courts, it gives us another great place to play.”

MPC member and Buchanan resident Pamela Maez voiced her support for the courts, saying the court’s location makes it one of the area’s best.

“The reason that they come to Fireman’s is because we have great shade,” she said.”It’s much cooler to play there because of the trees all around the court. … to be able to play on our courts is much more comfortable and we enjoy it. We really hope that you will help to improve our course, because we hit the ball and a lot of times it hits those major cracks and then our ball goes wild.”

Paddletek co-owner Curtis Smith spoke about the impact the courts have had on his business.

“These courts have reached mass market,” Smith said. “We have people that drive hours, just to see our facility, and it’s not much to look at. They always ask where they can play around here and then we sort of embarrassingly say, well, there are these courts over here, but you have got Grand Canyons running through some of them, but you can go and demo the paddles.”

Included in DeLucia’s presentation were a number of possible means of financial support for the project, including funds coming from area pickleball leagues and clubs, allocations from the park board and a special expenditure approved by the township. The board of trustees was receptive to the presentation but needed more time to decide.

“We don’t have an answer for you tonight,” said Niles Township Treasurer Jim Ringler. “What we can do, how we’re gonna do it. We will work toward those questions going forward.”